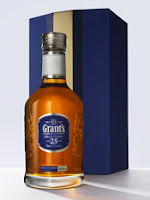 We were recently invited to the UK launch of Grant's 25 years old - the oldest expression in the popular brand's range.  It marks the first official time that the bottling is available on British shelves. The event took place in the impressively stocked Wine & Spirits department of the iconic Selfridge's department store in central London.  The launch and subsequent tasting was hosted by Ludo Ducrocq, the Global Brand Ambassador of the Grant's brand.

The Grant's whisky range is amongst the best selling in the world with sales around the 20 million bottle mark per year. The main markets are the France, South America (especially Ecuador and Venezuela) and the UK, although sales in other markets such as eastern Europe, Taiwan and the travel retail sector are increasing rapidly. The Grant's brand sits comfortably in the world's top five for the sales of blended whisky - the top five brands for market share in 2011 were Johnnie Walker, Ballantine's, Chivas Regal, Grant's (only fractionally behind Chivas) and J&B.

The Grant's 25 years old was originally released in July 2010 as an exclusive to the travel retail market. The whisky was constructed by the Grant's Master Blender Brian Kinsman and contained 25 different whiskies.  As with all blends which carry an age statement, it contains whisky with a minimum age of 25 years although some are much older. This includes a cask of grain whisky that was distilled on the first day of production at William Grant & Son's Girvan distillery on Christmas Day 1963 and whisky from their Ladyburn distillery, which closed in 1975.

During the evening, Ludo informed us that the second batch was under construction, again under the eye of Brian Kinsman.  For now the last remaining stock from this first batch, which is bottled at 43% ABV, will be on sale in the UK for a recommended retail price around the £210 mark.  Selfridge's have it exclusively until the end of the year, although it is worth noting that their price is 50% higher than the RRP at a whopping £320.

Our tasting notes
The colour is golden amber and the nose is rich and sweet with an immediate fruitiness to it - the prominent aromas are of peach and citrus zest, with some dried fruits (especially sultanas) coming slightly later. There are also aromas of honey, vanilla, plenty of delicate wood spice (imagine cinnamon bark, nutmeg and star anise) and a distant whiff of tobacco smoke.  The combination is delicious ...

On the palate, this whisky feels soft, viscous and decadent.  There is a splendid mix of sweeter notes (think especially of vanilla, honey and malty cereal grains) and fruity notes (fresh peaches and hints of dried fruit, particularly raisins and prunes).  This sweet fruitiness is tempered by some drying and spicier wood notes (imagine oak, cinnamon, nutmeg and a touch of gingery warmth).  There is also a hint of bonfire-like smoke and some milk chocolate which appears later.

The finish is decently long and like the palate, but in reverse - it starts off quite woody and spicy, before becoming sweeter and softer.  It almost goes full circle and becomes drier with a touch of spice to finish off.  It is very good and also takes a few drops of water well, which makes it even softer.

What's the verdict?
The Grant's 25 years old is a lovely and complex dram that deserves your attention.  It has elegance, complexity and is very easy to drink.  The combination of sweet, fruity and spicy notes is excellent and shows how older expressive whiskies can be skillfully blended together.  Naturally, the price will be obstructive to some but it is worth saving up to taste whisky of his quality.  The UK market will finally get to see it - better late than never, we say ...