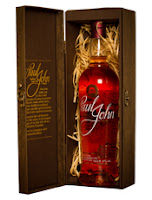 Paul John is the newest addition to the growing number of whiskies that are coming out of India.  It is produced by John Distilleries - they produce the Original Choice blended whisky, which is one of India's biggest whisky brands and the seventh best selling whisky by volume in the world, with annual sales of over 60 million bottles.  The company has decided to branch out in to the premium single malt whisky sector and Paul John is the result.  They have selected a single cask as the first release and this will be followed by other single casks in time.

The company of John Distilleries is based in Bangalore, but the single malt distillery is located in Goa in southern India.  The company was founded in 1992 and they have been distilling single malt whisky since 2008. The spirit produced for Paul John single malt has been made using 100% Indian barley and has distilled twice in traditional copper pot stills.  The whisky matures very quickly in the casks due to the high temperatures in India and undergoes an evaporation rate of approximately 10% per year.  This compares to about 1-2% alcohol evaporation in Scotland.

An ex-bourbon cask (Cask #161) was selected by the Master Distiller Michael John for this first release - it has yielded just 150 bottles, which have a natural cask strength of 57% ABV.  The whisky is just four years of age and has already gained plenty of high acclaim, including being awarded 94.5 points in the new Jim Murray Whisky Bible 2013.  It is currently only available in the UK, with The Whisky Exchange being the exclusive retailer.  It costs £59.95 a bottle - click here to order it from their website.  We went along to the recent launch event in London ...

Our tasting notes
The colour is golden yellow and the nose is light, fresh and vibrant.  There are immediate aromas of sugary toffee, honey and plenty of malty barley grains.  This grainy cereal note seems to increase with time and is joined by further aromas of vanilla, dried custard powder, lemon zest and plenty of dried grass/hay.  A late whiff of burnt caramel rounds things off.

On the palate, this immediately feels a bit hot, peppery and spicy.  There is again plenty of malted barley initially and this is accompanied by a tangy lemon zest note.  With time, the whisky softens and prominent notes of toffee, honey, vanilla and coconut come through.  Underneath are hints of wood spice (especially cinnamon), dried grass and sultanas.  The whisky seems quite basic but with a pleasant mouth watering and bittersweet feel.

The finish is short and very sugary with a sweet honeycomb-like sweetness leading the way.  This is tempered by a hint of tangy orange and bittersweet cereals, before becoming quite dry and spicy with plenty of cinnamon bark and dried coconut notes present.

The whisky seems to need the addition of some water - this helps to make it softer and feel creamier in the mouth with the vanilla, honey and cereals coming to the fore, while knocking back the hot spiciness.  It can take plenty of water also - the more that is added, the more the cereal notes increase, the softer it gets and an interesting spiced orange note begins to appear.

What's the verdict?
It is always interesting to try new whisky products, especially those from new distilleries or countries - it gives an idea of what may be to come in the future from a producer.  This first Paul John offering is well made but seems to lack depth and complexity.

At the moment, we think that the whisky shows potential but it will be interesting to see how this project pans out for John Distilleries and what some further refinement, maturation and development will do to future releases.  This will see Paul John truly establish itself as the premium product that it is being marketed as.   Cask #161 is a decent first effort and as with any new whisky venture, only time will tell if this is to be a success.  We look forward to sampling the next releases.