As with the previous weeks, this last week has proved super-hectic for all four of us as we have hit Christmas trading in our day jobs.  It has proved difficult to get any blogging done as a result.  Please bear with us over the coming weeks - posts will appear, but less frequently and when we have any spare time.  Here is what has caught our attention this week ...

Ballantine's - Christmas comes early
The best selling Scotch blended brand has announced the release of the third edition of the Christmas Reserve Limited Edition.  The Christmas Reserve first appeared in 2010 and is a special whisky created by the Master Blender of Ballantine's, Sandy Hyslop.  It is designed to have luxurious seasonal aromas and flavours such as cinnamon, orange, raisin, candy apple and pear. It is presented in a white presentation box decorated with snowflakes and gold foil.

The Christmas Reserve will be available in 15 markets across the world, which is more than ever before -  Bulgaria, China, Croatia, Denmark, France, Germany, Hong Kong, Mexico, Netherlands, Poland, Switzerland, Slovenia, Taiwan, Thailand and Vietnam. To support the release Ballantine's is launching a new Facebook app that invites users to virtually ‘pass the parcel’ to their friends, with a chance of winning a bottle of Ballantine’s Christmas Reserve. The app also provides seasonal recipes made with Ballantine’s Christmas Reserve, including mince pies and cocktails. To take part - click here.

The Crown Royal Maple Finished will initially only be available in the USA and will cost $24.99 for a 750ml bottle.  It is bottled at 40% ABV and is accompanied by a draw string bag as part of the packaging.  The product is being marketed to be consumed as a chilled shot, on the rocks or as part of a cocktail.  The launch is being supported by various promotional activity including television, print and social media advertising. 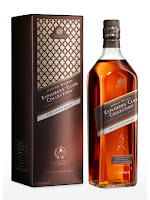 Johnnie Walker - Spice up their range
The largest whisky brand in the world has announced the first release in a new series of whiskies, which will be exclusive to travel retail - Johnnie Walker The Spice Road.  The series is called The Explorers' Club Collection in reference to John Walker's pioneering travel around the world to establish a market for his whiskies back in 1800s.  The Spice Road is the first in a sub-series named the Trade Route Series - the whiskies are inspired by the cultural richness that can be found on three of the world's great trade routes.

Jim Beveridge, the Master Blender of Johnnie Walker, says "To create the intense spicy flavour profile The Spice Road, we used well-matured single malts and grains, presenting all their fresh vibrant distillery characters, aged in carefully selected, high quality American oak casks; and of course there is a trace of West Coast smoke in the background - revealing the classic Johnnie Walker signature”. 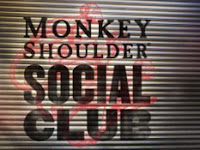 Monkey Shoulder - Gets social
The Monkey Shoulder whisky brand is taking over an east London venue next week in order to change consumer perception of what a whisky club is.  The event is being held next Thursday (December 6) between 7-11.30pm at a secret location that will be decked out with retro charm in order to entice whisky lovers and whisky virgins alike.

posted by Whisky For Everyone at 6:09 AM