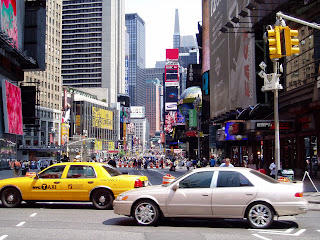 New York City is rightfully famed for its night life. Any city vying for “best city in the world” status has to have some pretty cool bars to while away the small hours and get a little merry and New York’s sheer size means there’s a lot of places to choose from. So, on a recent holiday across the pond I ended up in a couple of Gotham’s excellent whisky bars in order to sample some of that famed night life and a couple of whiskies. 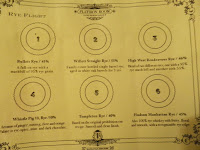 Located in the Flat Iron district in midtown Manhattan (though not in the actual Flatiron building), the Flatiron Room is located on a relatively quiet side street (we’re in Manhattan!) between 6th Avenue and Broadway. They describe themselves as a Whisky and Fine Spirits parlour, which seems pretty grand to me but the overall atmosphere is extremely relaxed and welcoming.

The décor is a mix of contemporary bar and 1930’s nightclub set in an old Victorian library converted to house whiskies instead of books. Low lighting, big leather banquettes, plush velvet curtains, sparkly chandeliers and very friendly and dapper waiters. Whiskies in cabinets lined the walls and another selection of whiskies sat behind the bar. On our visit the stage was populated by a jazz duo who seemed to be going through jazz versions of tracks from The Best Lift Music Album in the World….Ever! My only criticism, but the music wasn’t invasive at all which I suppose was what it was supposed to be.

The drinks selection is impressive. In terms of whisky they claim to have one of the largest and best selections on the east coast which I don’t doubt. Prices aren’t exactly cheap though. The range of single malt Scotch was extensive, ranging from the just about affordable to the eye-watering. The American whiskey selection was what I was most interested in. There was a huge range of bourbons, ryes and other American whiskies and prices for these were a little more affordable.

The cocktail menu was also extensive, with some really interesting things on offer, most were obviously whisky based cocktails. When we arrived it was happy hour and so all the cocktails on the menu were half price. This was an excellent offer and one my girlfriend took up with much enthusiasm. I went for the Rye Flight for $45 which was a selection of six rye whiskies from various distilleries which luckily I had yet to try. There are several different Flights on the menu offering a range of different whiskies at slightly smaller measures concentrating on themes or styles. I found the pourings were more than enough and pretty generous given the price.

This was a great bar with a very good selection of both American and Scottish whiskies. We’ll worth popping by for a drink or two if you’re in the area but book a table in advance, it get’s busy. 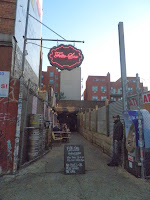 This bar/restaurant is located on Metropolitan Avenue in the very lively area of Williamsburg in Brooklyn, just one top on the Subway from Manhattan (nearest stop Bedford Avenue). Fette Sau specialises in slow cooked smoked meats such as brisket, pulled pork and ribs. They also boast the best American whiskey selection in New York City as well as lots of different craft beers.

Located a little off the street in what used to be an old garage, the only thing that signifies Fette Sau's presence is a big pink neon sign hanging over what presumably used to be the driveway that lead to the garage. This driveway, lined with tables on one side and a corrigated iron fence on the other, now leads to the bar/restaurant space. The internal space is decked out quite plainly with exposed brickwork. There’s a very cool mural on one wall depicting all the different cuts of beef and pork. Three rows of tables take up the central space, canteen style with a bar of the far wall and the serving area to the side.

The American whiskey selection is indeed, very impressive. As with The Flat Iron Room, Fette Sau offered the chance to order flights, based on theme or styles as an opportunity to try many whiskies in smaller quantities. This time however I didn’t go for a flight but instead chose a few whiskies as yet, unavailable in the UK. These included the Maker 46, Widow Jane Rye which were both excellent. Most whiskies range from $7 to $15 a shot. The most expensive whisky was an ancient bottle of bourbon from 1902 called Old Richland Reserve for $102.

The food here is excellent with amazing cuts of beef and pork literally falling off the bone. Orders are placed school canteen style and portions are ordered by the weight and served and a tray lined with grease proof paper. If you don’t come here for the whiskey you should definitely come here for the food. This place is extremely popular so I’d advise you go earlier in the evening. It filled up pretty quickly after we arrived on a Sunday afternoon.

This is a great place with a lively atmosphere with a good mix of long term locals, Williamsburg hipsters and tourists. The whiskey selection is excellent and the food is fantastic. The surrounding area itself is well worth a visit if you're in New York city and if you are in that neck of the woods this is a must place to visit.

I Like that post, its really have an amazing taste. for the packaging of Chocolates and Sweets Boxes contact Liquid Printer. because Liquid Printer is the best On Line printing and packaging company. we will ship your orders at your door step.

First off, great review! Secondly, Thank you for mentioning Widow Jane Rye. I am a distiller at Cacao Preito, the parent company that produces the Widow Jane range of whiskies. Glad you enjoyed it.

Also, unfortunately you missed out on the actual best whisk(e)y bars in NYC. My go to everytime for a mix of whiskies from all over is 'Noormans Kil'. They have a huge selection of american, scottish, japanese et all. And to cap it off they do gourmet cheese toasties.

If you want to stick with a majority of Scottish whiskys, then head to 'Isle of Skye'. 150 plus of your favorite drams and Scott, the bartender, is also a hoot and very informative. They also have free tastings on tuesdays once or twice a month.

Now if you are looking for some seriously good BBQ in NYC, look no further than 'Morgans BBQ', a brand new spot on the corner of St. Marks Ave & Flatbush Ave. The food is incredible and their brown booze selection seems to be growing and growing.

Give me a shout the next time you are state side and we can grab a dram.

Custom Boxes World is the world’s leading Custom Lipstick Boxes manufacturer in the United Kingdom. We’re printing lipstick boxes as per our high-quality printing process. Therefore, we are the first choice of all lipstick manufacturers UK.

Thank you for sharing informative information. So much helpful for newbies and easy to read. I appreciate your efforts. Keep up the good work.share care to product consumer and planet through craft boxes.

This blog is very informative. Custom Packaging can be a long excited process but it can be made easier by following the tips that you have mentioned above. Thanks for sharing such important and useful information. Keep it up.
visit mentioned website for printing and packaging services.
custom game boxes

I have never been more intrigued by content as I have with this one. We at Business Statistics Assignment Help offer homework help services at an affordable price. Our services are available 24/7. Feel free to contact us.