CaskStrength - Now in 3D
Our good friends Neil & Joel at Caskstrength have announced the fourth release in their 'Whisky Alphabet' series.  The 3D Whisky follows on from single casks of Arran and Benriach, plus a special cask strength expression of Cutty Sark.  It is a blended malt created using single malts from three Diageo distilleries - Dailuaine, Dalwhinnie and Dufftown.  The guys employed the help of Dr Matthew Crow, one of the senior blending team for the Johnnie Walker range, to aid the creation process.

The 3D Whisky is bottled at the natural cask strength of 56.4% ABV and there are just 504 bottles, each of which are individually signed and numbered.  They are being exclusively retailed via the Master of Malt website and the price is £49.99.  Each bottle comes with a set of 3D specs to help read the 3D label, and there is a 3D package which can be downloaded from www.3dwhisky.com.  More information about the release can also be found here.  Below is the product video which premiered at the launch in London last Monday.


Glenfiddich - Spirit Of A Nation 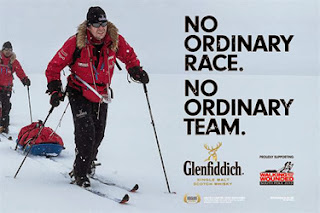 William Grant & Sons, the owners of the Glenfiddich distillery in Speyside, have launched a very special single cask bottling of its world famous single malt.  The Spirit Of A Nation is a 29 years old whisky that has been released to celebrate the brand's sponsorship of a charity expedition to the South Pole.  The charity involved is Walking With The Wounded, who help and support UK military personnel who are injured during service.  The team members, all of whom have been injured in action, are being joined by Prince Harry and start their adventure this coming Sunday.

The whisky is exclusive to the UK market and has been matured for 29 years in a single ex-Sherry cask, before being transferred for three months in to a fresh American oak cask - this cask traveled around the UK and was signed by members of the public during events hosted by the Team Glenfiddich members (see the short video, below).  It has been bottled at the natural cask strength of 48.8% ABV and there are just 200 bottles.  These will be on sale shortly via selected specialist retailers with a recommended retail price of £1,000 each.  All proceeds from sales of Spirit Of A Nation will go back to the charity.

Master of Malt - Christmas is coming
Forget the cheap chocolate - the innovative online retailer Master of Malt have unveiled an advent calender with a difference.  The Whisky Advent follows on from last year's highly successful original and features 24 of the company's award-winning 'Drinks By The Dram' 3cl bottles of whisky sourced from all over the world.  It costs £149.95.

posted by Whisky For Everyone at 8:17 PM

Great job! Your article is so informative. I really like it. if can you write on custom boxes.

Line Heights is one of the Best Web Design Agency in UK , with skilled developers. You can hire them for custom websites development, share your idea and get your website.