Douglas Laing - Release the Scallywag
One of Scotland's leading independent whisky companies have announced the imminent release of a special new product.  Douglas Laing & Co have launched the Scallywag, a vatted malt made in small batches and only using Speyside single malts.  Amongst those malts named are Glenrothes, Macallan and Mortlach, although more have been used.  It is bottled at 46% ABV and is non-chill filtered and of natural colour.

The packaging has been inspired by the long line of Fox Terriers that have been owned by the Laing family.  The breed is known for being sweet and affectionate yet mischievous.  The fun nature of the brand and packaging follows a similar line to the Scallywag's stablemate vatted malt of Big Peat, which sees the popular bearded character adorning the bottle and all manner of other related merchandise.  The Scallywag will be available in specialist retailers very shortly.  No details of price have been supplied to date.

Fred Laing, Douglas Laing’s Managing Director (and proud Fox Terrier owner) says: “From a chance sketch by a designer of our sweet, wee, rascal of a Fox Terrier, our Scallywag Malt Whisky was born! “Sweet” was the key which focused us on Speyside. Its cask selection is self-evidently heavy on the sherry background, balanced by first-fill bourbon casks – so the resulting vatted malt comes with an excellent pedigree”.


Jura - Get writing for new competition

The Isle of Jura single malt brand have announced a competition that will see the eventual winner offered an all-expenses paid trip to the island and the Jura Whisky Festival 2014.  They are asking for budding writers to submit their stories of 1,000 words or less - a variety of themes will be set by the brand every fortnight.  The first theme is 'Travel Adventure'.  The competition will run until Friday 10 January 2014, when the public will get the opportunity to vote for their favourite story from 30 finalists.

The first prize also includes staying in the luxurious Jura Lodge, a VIP tour of the Jura distillery, a boat trip around the famous Corryvreckan whirlpool which is nearby and a visit to Barnhill, the remote house where George Orwell wrote his seminal novel 1984.  The competition will be backed up by structured social media activity.  For further information about the competition and how to enter, including detailed T&Cs, please visit www.jurawhisky.com. 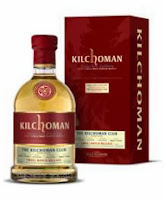 Kilchoman - Members get lucky
The craft distillery of Kilchoman, which is the smallest distillery on the famous whisky island of Islay, has announced the release of an exclusive single malt for its club members. The Club Second Edition is made from eight casks which have been specially selected by Distillery Manager John MacLellan and Managing Director Anthony Wills.  All were ex-bourbon casks and were filled in October 2008.  The whisky has also been finished in ex-Oloroso sherry butts.

There will be just 2,000 bottles available and these will be exclusive to those Kilchoman fans who have signed up to the club.  You can do this simply by visiting www.kilchomandistillery.com.  It will be bottled at the natural cask strength and will be available from 12pm next Monday (November 4) via the Kilchoman website.  A bottle will cost £75.

Anthony Wills said: “Last year the release was very popular with our club members, as it sold out instantly and the amount of visitors brought down our website. In preparation we’ve expanded the website to make sure it can cope with the expected increase in traffic.”

Teeling Whiskey Co -  Goes with the grain
The Irish independent company of Teeling Whiskey Co have announced the launch of their first ever Irish single grain whiskey.  The whiskey has been made predominantly from maize and is normally used as the base for many of Ireland's most popular blends.

TWC have decided to celebrate single grains in their own right and this first expression has been fully matured in ex-Cabernet Sauvignon red wine casks. The release has been bottled at 46% ABV and is non-chill filtered and of natural colour.  It will be available shortly through specialist retailers in selected markets.  No details of price were given on the press release received.

posted by Whisky For Everyone at 8:08 PM