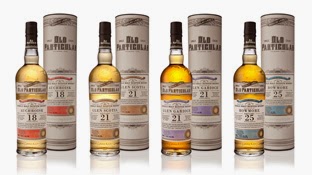 The Old Particular range is a new selection of single cask single malt whiskies released by the independent bottling company of Douglas Laing & Co. The range has been in development since January this year and includes stylish packaging that is covered with information about the release, including colour coding to show the whisky's region of origin. All casks are hand selected by Fred Laing, the Managing Director, and Jan Beckers, the Global Brand Ambassador for the company.

Douglas Laing and Co. are a Glasgow based company that was founded by Frederick Douglas Laing in 1948. They are one of Scotland's largest independent bottlers. Until recently the company was run by Frederick's two sons, Fred and Stewart. Earlier this year the brothers decided to go their separate ways with Fred continuing with Douglas Laing and Stewart starting a new company called Hunter Laing. Douglas Laing release a number of ranges of single malt and single grain whiskies, as well as the highly popular Big Peat blended malt and the King of Scots blend.

The Old Particular range is bottled at three different strengths - 48.4% ABV for ages up to 18 years old, 51.5% ABV for ages 19 years old + and the natural cask strength for selected rarities. These strengths have been selected to maximise the flavour profiles of the whiskies.  All are of natural colour and non chill-filtered. The first batch, of which these three whiskies were part, was released in September.  The range is available through selected specialist whisky retailers. 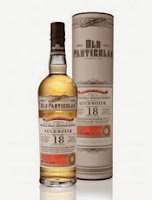 Auchroisk 18 years old Old Particular
The distillery of Auchroisk is located in Speyside and was opened in 1974 by wine merchant Justerini & Brooks to aid production of their popular J&B Rare blend.  It is currently owned by Diageo and is predominantly used for the same purpose. Single malt releases are rare despite it having a 5.9 million litre annual capacity.  This single cask is bottled at 48.4% ABV and should cost around £85.

The colour is pale gold and the nose has a vibrant freshness to it.  There is an immediate hit of zesty lemon and honey, which is backed up by aromas of brown sugar and malted cereals.  There is also a distinct floral note, although it is difficult to pin down, and vanilla.  On the palate, this is initially tangy with the lemon zest at the fore again.  This subsides to let through notes of barley sugar, dried green apple, honey and the tiniest hint of orange oil.  There are late notes of dried grass and cinnamon. Overall, it is not quite as vibrant as the nose.  The finish is of decent length - a peppery heat builds as the sweeter notes fade, leaving a gripping dryness in the mouth. 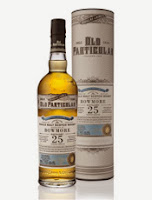 Bowmore 25 years old Old Particular
Bowmore is the oldest single malt distillery on the famous whisky island of Islay.  It was founded in 1779 by John Simpson and is currently owned by Morrison Bowmore Distillers, which is a subsidiary of the Japanese company Suntory.  Bowmore has an annual production capacity of two million litres.  This single cask is bottled at 50.2% ABV and should cost around the £275 mark.

The colour is golden yellow and the nose is classy and understated.  There are aromas of honey, vanilla, dried seaweed, dried mango and Bowmore's distinctive note of palma violet sweets. These are backed up by honey, vanilla, delicate wood spices and whisps of background bonfire ash/smoke.  On the palate, this is soft and silky despite the strength.  It is hugely flavoursome and there is an instant hit of icing sugar-like sweetness that quickly develops into the palma violet note - this is stronger than on the nose.  Other notes compliment this well including green apple, maple syrup, vanilla, peach, lemon zest, a hint of cinnamon bark and finishing with a slightly salty tang.  The smokiness is never far away but remains understated and toys between wood ash and coal ash.  The finish is prolonged by the increasing smoke and drying saltiness. 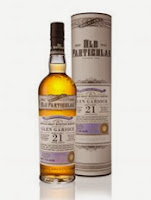 Glen Garioch 21 years old Old Particular
Glen Garioch is another one of Scotland's oldest single malt distilleries and is also owned by Morrison Bowmore Distillers.  It was founded in 1797 by Thomas Simpson and is located in the east Highlands.  Glen Garioch remains one of the most traditional distilleries in Scotland and has an annual production capacity of one million litres.  This single cask is bottled at 51.5% ABV and is priced around the £100 mark.

The colour is a golden yellow and the nose is punchy and full of wood spices - think of cinnamon, nutmeg and dried coconut.  These are quickly joined by aromas of golden syrup, tonnes of vanilla and hints of candied orange peel and ginger.  On the palate, this whisky follows a similar path to the nose - the intense woody spices hits first (especially the coconut and cinnamon) and these are followed by the sweet and bittersweet notes - imagine honey, vanilla, butterscotch sauce, malted cereals, bitter oranges, ginger and a hint of liquorice.  The finish is long and warming with the woody spices and malted barley again most dominant.  The bitter orange note is the last to fade.


What's the verdict?
Douglas Laing have done well with this initial set of releases.  All are good solid single malts and it will be interesting to see how the range develops.  We are sure that it will go from strength to strength with the interesting mix of well known and lesser known distilleries.  It was particularly good to try the Auchroisk as it is a distillery that we have tried very little from, and old Bowmores are always delicious.  However, our favourite was the Glen Garioch as it had a great depth, complexity and warmth to it.

SOME FEW FOR NORWAY NOW. HOPE IT WILL BEE MORE LATER