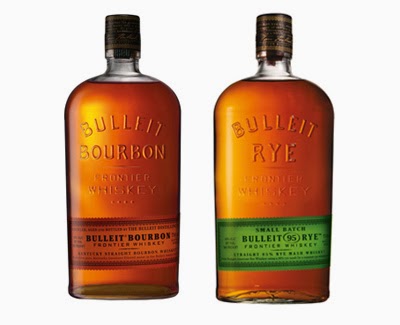 Bulleit - To shoot into UK
Diageo, the owners of the Bulleit bourbon brand, have announced that they will be launching two new products in to the UK market to meet the growing demand for premium American whiskies there.  This is said to come from the ever growing bartending community, who are increasingly using higher strength and rye whiskeys in cocktail recipes.

The first product is the Bulleit 45%, which will replace the current 40% ABV version that is sold in the UK.  This is already sold in Canada, Mexico and the USA.  Also launching for the first time is the Bulleit Rye, which was first launched in the USA in 2011 and has proved extremely popular.  This is also bottled at 45% ABV and is made using a mash bill of 95% rye grain.  Both will be available in early 2014 in selected retailers, with both priced in the mid-£30s region.  The move comes as Diageo aim to grow the brand during 2014.


The leading Glasgow based independent bottler Douglas Laing & Co have announced the details of their annual charity release.  This year's bottling is from the Braeval distillery on Speyside and has been maturing in a single ex-sherry cask for 12 years.  All proceeds from sales will be donated to the Royal Air Force Benevolent Fund, the RAF's leading welfare charity.  The charity was selected as Fred Douglas Laing, one of the company's founders, flew in the RAF Coastal Command during World War II.

There are just 762 bottles of the Clan Denny Braeval 12 years old and each has a label depicting a Spitfire plane, which has been hand drawn by Scottish artist Professor Dugald Cameron.  This Spitfire was flown by members of the 602 City of Glasgow Squadron during World War II.  It has been bottled at 46.8% ABV and is non chill-filtered and of natural colour.  The whisky is available now in selected specialist whisky retailers at a cost of £45.99 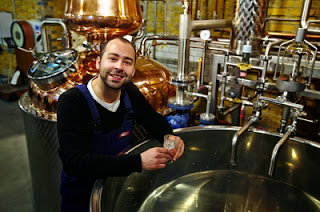 Yesterday (December 12) was a monumental day in the history of distilling in the English capital as the London Distillery Co fired up its stills for the first time to produce single malt whisky.  It is the first time that single malt has been produced in London in over 100 years, since the last distillery (Lea Valley in east London) closed in 1910.  The whisky will be produced in a 650 litre still named 'Matilda' and they have a capacity to produce around 100 casks per year.

The London Distillery Co was founded in 2011 by Darren Rook and Nick Taylor, and it has taken them almost three years to get to this stage.  They have been working during the development stage with distiller and blender John C McDougall and industry consultant Dr. Jim Swan.  One of the key areas that they are concentrating on is sustainability with everything being sourced from within 100 miles of the distillery - the yeast comes from Surebrew in Surrey and the barley is supplied by Warminster Maltings in Wiltshire.

Darren Rook (pictured, above) comments: “It is not widely known that the capital has a great heritage of whisky production dating back to before Chaucer. Since meeting Nick it has taken three years of hard work from the early concept to get to where we are today. We are really excited to be part of a new chapter in the city’s distilling legacy. This is really only the start of the journey as we have some time until the whisky reaches its optimum."