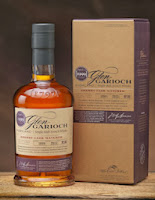 This whisky is a new bottling from Glen Garioch, which is Scotland's most easterly distillery.  The 1999 Vintage is the latest addition to its popular and ever-growing small batch vintage range. This new expression is the first whisky from the distillery to have been fully matured in ex-Oloroso sherry casks. Any ex-sherry cask whisky is normally mixed with that matured in ex-bourbon casks to produce the single malts in Glen Garioch's core range.

Glen Garioch (pronounced glen-geery) is located in the village of Oldmeldrum, which is found between Inverurie and Aberdeen in the east Highlands. It is one of the oldest distilleries currently in operation in Scotland, having been founded in 1797 by Thomas Simpson.  The distillery is currently owned by Morrison Bowmore, who are part of the larger Japanese company of Suntory, and is relatively small with an annual capacity of around one million litres. Morrison Bowmore re-opened the distillery in 1997 and they have established Glen Garioch as a single malt for connoisseurs.

There will be just 6,000 bottles of the 1999 Vintage and these are released at the natural cask strength of 56.3% ABV, is un-chill filtered and of natural colour. The 1999 Vintage is available now through selected specialist whisky retailers around the world and has a recommended retail price of £59.99.  The whisky sees Glen Garioch continuing to innovate and follows on from the Virgin Oak, which was released earlier this year and was reviewed by us here.

Our tasting notes
The colour is a deep reddish amber and the nose is full of rich, fruity aromas.  There are immediate notes of raisins, sultanas and candied orange, along with caramel and toffee.  Then come further aromas of caramelised nuts (think of almonds and hazelnuts), some fairly robust malted cereals and a good pinch of cinnamon and nutmeg.

On the palate this has a lively vibrancy due to the high ABV, but is warming and rich.  The whisky coats the mouth and there are initial notes of brown sugar, caramel and a hint of black treacle.  The dried fruits detected on the nose then begin to come through (especially the raisin and orange) and these are joined by a distinct nuttiness and woody spiciness - think of toasted almonds and cinnamon in particular.  These notes temper the sweetness and give balance and a little dryness.  water softens the whisky and brings out a fudge-like note, along with pushing the raisin characteristic to the fore.

The finish is warming and begins with the sweeter elements in control, before the woody/nutty notes turn things drier and spicier.  It is long with the dried fruitiness dying away to leave a lovely caramelised nuttiness and dry cinnamon-like edge.

What's the verdict?
From our experience Glen Garioch has always offered top quality liquid in the bottle and it is great to see the innovative steps that the owners have taken with the brand this year.  In our opinion, neither this 1999 Vintage or the Virgin Oak from earlier in the year are our favourite expression from the distillery but they both show the versatility of the spirit.

They have also both taken Glen Garioch in different directions from the core range and other expressions in the Vintage series, which will potentially open up this much under rated whisky to new consumers.  We can't wait to see what exciting things that may come from Glen Garioch next year ...