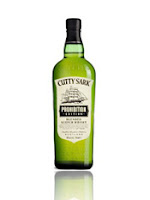 Today marks the 80th anniversary of the end of Prohibition in the USA. 2013 also marks the 90th birthday of the Cutty Sark blended whisky brand. The Prohibition Edition has been created as a celebration of the earliest days of Cutty Sark, when it was smuggled into the USA during Prohibition by infamous bootlegger Captain Bill McCoy.  This is the man whose name was lent to the term ‘The Real McCoy’, as you knew the product was genuine and not a fake when he delivered it. McCoy was teetotal so his cargo, unlike many others, could be assured not to be ‘sampled’ and, as a result, watered down.

Prohibition Edition is blended in the traditional manner but was then allowed to marry together, and receive a little more maturation, in American oak casks. Bottled at 50% ABV, which is 100% Proof for Americans, this blended Scotch whisky was created to replicate that which would have been made all those years ago when it was being handled by Bill McCoy. Initially, Cutty Sark Prohibition Edition will be available in the USA and six other markets, including the UK, but will then be released in a number of other international markets later.

The Cutty Sark brand was born in March 1923, allegedly following a lunch between the owners of the famous London wine and spirits merchants Berry Brothers & Rudd (Francis Berry and Hugh Rudd) and Scottish artist James McBey. It was named after the Cutty Sark, the famous tea clipper, and legend has it that McBey started drawing the logo of the boat on a napkin. The brand was aimed at the export market and in the post-Prohibition era in America it rapidly grew to become the best selling Scotch whisky there. Cutty Sark remains one of the biggest selling whisky brands in the world and is currently owned by the Edrington Group.

Our tasting notes
Golden amber in colour and sweet and fudgey on the nose, this whisky offers the light and vibrant style that would have been so popular. Beyond sweet toffee apple and fudgey aromas the nose delivers blossom floral notes, tangy green apple, zesty lemon and lime citrus, freshly cut grass and increasing maltiness (think of Ovaltine or Horlicks bedtime malt drinks).

On the palate the higher than normal ABV packs quite a punch with sugary sweetness, flowers, orange and citrus, and increasing depth of maltiness. The finish is short and sweet (literally) with some additional toffee and milk chocolate and a slightly longer lasting citrusy bite. Adding water certainly softens that alcohol punch and brings out the floral and appley notes while the toffee sweetness and grassy maltines remain as a constant.

What's the verdict?
While we can only guess at what the original Cutty Sark tasted like, this is a thoughtful insight into what could have been. It is light and fresh and would make an ideal whisky for drinking over ice or in cocktails, as it would have been back in Prohibition days.

The higher ABV gives this Scotch whisky more bite and exaggeration of flavours while adding water brings out some of its more delicate features. This provides flexibility to ensure that this whisky would stand out in a cocktail and be easily complimented and partnered. Selling prices are not yet published so we can’t yet comment on its value for money.

I rediscovered Cutty Sark not too long ago. Nice clean whiskey!

eToro is the #1 forex broker for newbie and advanced traders.