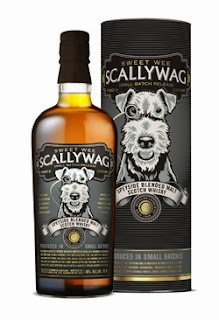 A few weeks ago we announced a competition where we teamed up with Douglas Laing & Co, one of Scotland's leading independent whisky bottlers, to offer you the opportunity to win a bottle of Scallywag, their new blended malt.  The Scallywag is made in small batches and use only Speyside single malts - amongst those named are Glenrothes, Macallan and Mortlach, although more have been used. It is bottled at 46% ABV, is non-chill filtered and of natural colour.

The packaging has been inspired by the long line of Fox Terriers that have been owned by the Laing family. The breed is known for being sweet and affectionate yet mischievous, hence the name. This led us to the idea of asking for your favourite photos of your own dogs.  We received the largest ever response to a competition and it has taken us some time to sort through all of the photos and decide the winners.  Apologies for this.

Cara Laing from Douglas Laing & Co helped us to decide and was so impressed that she has donated another bottle as a prize.  Therefore we have two winning photos - Alicja from Ireland and the photo of her dog Whiskey, and Phil from the UK and the photo of his dog Sausage.  Congratulations to both and thanks to everyone that took the time to enter the competition.  Here are the two winning entries ....

Email ThisBlogThis!Share to TwitterShare to FacebookShare to Pinterest
labels: competitions, douglas laing, whisky for everyone

I got my bottle today - very nice Christmas gift :) Thank you very much
Alicja