The new range of single malts from the Speyside distillery of Mortlach is one of the most anticipated whisky releases for a long time. Mortlach is highly regarded amongst whisky drinkers and previous bottlings have attained cult status. Now it is time for the whisky and brand to evolve and introduce new consumers to its delights and qualities. The new range is formed of four single malts - the Rare Old and Special Strength, plus 18 and 25 years old expressions. In this post, we will be concentrating on the two oldest whiskies in the range.  To read our review and thoughts about the Rare Old and Special Strength - click here.

Mortlach is located on the edge of the Speyside town of Dufftown, which is famous for being home to seven single malt distilleries. Mortlach was the first of these and was founded in 1823 by James Findlater. It is currently owned by Diageo. The whisky from Mortlach is mainly used within Diageo's extensive range of blends, most prominently in the hugely popular Johnnie Walker Black Label and Double Black. The current capacity is 3.8 million litres per year, although plans have been announced that will see the distillery extended significantly and production doubled to almost 8 million litres per year by the end of 2015.

The whiskies are presented in bespoke bottles, which have been designed especially for the new range. These draw inspiration from Mortlach's history, and specifically the involvement of former owner George Cowie who took over in the 1850s. He was a previously a trained engineer and was involved in a number of innovative Victorian industrial design projects, including railway bridges and viaducts. The bottles are 50cl (75cl in the USA for legal reasons) and these two older expressions feature metalwork inspired by Cowie's Victorian designs, as shown below. 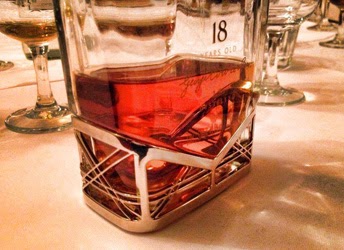 The 18 years old will have a recommended retail price of £180 and the 25 years old will be £600 a bottle. Both are bottled at 43.4% ABV and will initially be launched in London and Berlin in June, followed by further cities in the Asia (Beijing, Hong Kong, Shanghai, Singapore and Taipei) and the USA (Chicago, New York and San Francisco) in August. 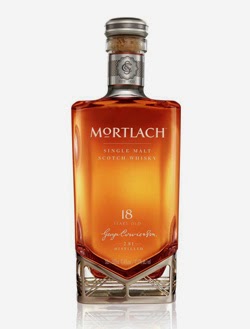 On the palate this feels very silky, viscous and slightly waxy.  There are lots of layers of flavours, beginning with some warming wood spices that develop early on.  This spiciness is an earthy and savoury combination of cinnamon, ginger, sandalwood and dried tobacco leaves.  A delicious sweetness is driven by sugary and fruity notes - these include crumbly brown sugar, caramel and a hint of treacle or molasses along with orange oil, raisins and lots of dried tropical fruit characteristics (like on the nose), especially mango and pineapple.  Final hints of dark chocolate and walnut add further depth and complexity.  The finish is lovely and sweet with similar sugary and fruity notes as on the palate.  Then the orange becomes a little more bitter and the earthy wood spices come to the fore to give a mouthwatering dryness. 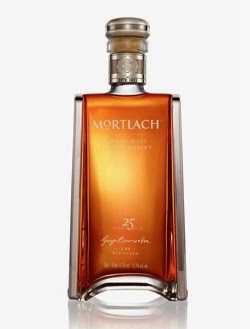 Mortlach 25 years old
The colour is a deep golden amber and the nose is elegant and highly perfumed.  There is plenty of initial wood spice (think of sandalwood and cinnamon) and waxy furniture polish in evidence, and these are quickly joined by tropical fruit aromas (imagine dried pineapple, mango and peach).  Background hints of vanilla, marzipan and white chocolate add depth, as does a whiff of earthy tobacco-like smoke.

On the palate this whisky immediately feels very classy - it is waxy, robust, mouthcoating and luscious.  There is an initial sweetness and fruitiness, which is driven by notes of golden syrup, white chocolate, malted barley, peaches, apricots and dried pineapple.  These are joined by some charismatic almond oil and warming earthy notes of ginger and ginseng.  Robust wood spices then begin to gain more influence.  Cinnamon, nutmeg, sandalwood and cedarwood notes combine to give a pleasant dryness that compliments the sweeter, richer elements.  There are further hints of almond oil, eucalyptus, liquorice and cocoa powder.  The finish is sweet and filled with the warming ginger and wood spice notes that give a gentle dryness.


What's the verdict?
It would have been easy for Diageo to create four new whiskies based around the highly regarded 16 years old Flora & Fauna release, which has now departed.  This exhibited a huge influence of ex-sherry European oak casks and has been enjoyed by whisky fans over the years.  The mourning of a cult classic is understandable but the reality was that only 4,000 bottles a year were being sold.  Diageo want to bring the spirit to a new audience.

Instead of taking that easy option, they have been more creative and given us four new whiskies that highlight the qualities of the Mortlach spirit across a range of ages.  The Rare Old is very good as the entry level whisky in the range and as an introduction to Mortlach for the uninitiated.  It will certainly be featuring in our drinks cabinet once released.  The Special Strength is more punchy and will cater for most cask strength whisky fans.

The 18 and 25 years old expressions are both sublime and very classy.  The quality, depth and complexity of aroma, flavour and character that each demonstrates are superb.  You will need deeper pockets to purchase them, but the prices reflect their age and the rarity of the casks used to create them.  The high regard and usage of Mortlach in blended whisky has dictated the low availability.

Picking a favourite is extremely tricky as they are all very good.  If we had to, we would probably choose the 18 years old for its great balance and concentration of flavours.  Time to start saving we think ...

posted by Whisky For Everyone at 6:47 PM

Seriously?!! I've never heard such euphemistic tosh. The pricing of these boutique 50cl "decanters" is nothing short of scandalous. Can't we just be honest about it?

"You will need deeper pockets to purchase them, but the prices reflect their age and the rarity of the casks used to create them. The high regard and usage of Mortlach in blended whisky has dictated the low availability."

Do they? I am not sure about the rarity but the price reflects ambition, certainly need for achivement for sure - why do only Macallan and Dalmore earn so much for so little?
Greed most probably - 600 Pounds was not enough for a 700ml bottle it had to be 500ml!

It's Diageo, what did you expect? Remember, their the makers of such as the $250 blended whisky, screwed Brewdog out of an award and take nearly everything down to 40%. Greed is what they do best. Mortlach is their attempt at positioning a sought after distillery as a competitor for Macallan and Dalmore in the single malt rip off wars.

That is what a multinational is all about : Making more, more and more profit. As long as the hype continues and the banks are laughing with the money we save people will by this overpriced liquid as an investment
There is however a big loser : The whisky lover