Ballantine's Brasil is a new spirit drink infused with lime and represents the first foray in to the flavoured whisky market by the famous brand. It will sit alongside the core range of blended whiskies, ranging from the best selling Finest to the 30 years old expression, in the brand's portfolio and is designed to bring new consumers to Ballantine's and the Scotch whisky category.  The name evokes thoughts of cocktails and the tropics, plus having a clear link to this year's football World Cup being hosted in Brazil. It is bottled at 35% ABV and has been created by Ballantine's Master Blender Sandy Hyslop.

Ballantine's whisky was first produced in 1869 by a Edinburgh grocer named George Ballantine. He had expanded his grocery business in to the area of wines and spirits, before deciding to start blending his own whiskies. The whisky business was booming at the time and many people began producing their own blends during this period, including other famous names such as William Teacher and Arthur Bell.  The extensive range of Ballantine's is now in second place for total volume sales, behind only Johnnie Walker, and sells a staggering 70 million bottles a year.  The brand is currently owned by Chivas Brothers, part of the larger Pernod Ricard group.

Ballantine's Brasil has been created by steeping Brazilian lime peel in selected casks of Ballantine's whisky.  The product is the latest in a line of popular brands that have entered the ever increasing flavoured whisky category - this includes examples such as Bushmills Irish Honey,  Fireball, Jack Daniel's Honey, Jim Beam Red Stag and J&B Urban Honey.  It was launched in the Czech Republic and Holland at the end of last year and is now being rolled out in selected markets around the globe.  Brasil will cost £12.50/€15 for a 70cl bottle. 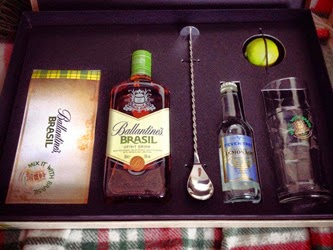 A couple of weeks ago, a rather large package (pictured, above) turned up at Whisky For Everyone HQ (our house).  It has to be said that this is one of the best ever sample packages that we have been sent from any brand or PR agency.  The package and its contents had us intrigued - it contained a booklet of suggested cocktail recipes, a 70cl bottle of Brasil, a stirring spoon, a small bottle of lemonade, a special Brasil long glass and a fresh lime.  Over the last weekend we decided to try the Ballantine's Brasil in various ways ...

Our tasting notes
First, we sampled Brasil neat.  The colour is golden yellow and the nose has a mix of honey, vanilla and lime (think of Rose's lime marmalade) with a pinch of cinnamon.  On the palate it feels thick, warming and syrupy.  There are immediate notes of honey, vanilla and soft malty barley, which are complimented by the lime element.  This has a bitter edge to it and is reminiscent of candied citrus peel.  Underneath are hints of earthy ginger and cinnamon.  The finish is decent and the honey-like sweetness fades to leave the bitter and tangy lime as the lasting note.

We then set about trying Brasil with a variety of mixers.  Firstly, we went for lemonade supplied in the package (this creation was named as a Highland Samba in the recipe booklet).  A couple of slices of lime were crushed in the bottom of the tall glass, which was them filled with ice and a healthy pour of Brasil.  This was topped up with the lemonade and the result was a lovely refreshing drink that tipped towards the bitter side, as the lime peel note from the spirit mingled with the zesty lemon.  It would be very refreshing on a hot day.

Next up were our own 'creations' - ginger beer and soda water.  Both again had crushed lime slices, Brasil and ice in a tall glass before being topped up with the mixer.  The fiery, earthy ginger clashed slightly with the bitter lime peel note of Brasil but was pleasant enough. The mix with soda water was much more successful and was the most enjoyable of all.  The soda water allowed both the sweet and citrus notes through and was deliciously refreshing.  It made us long to be on a hot sandy beach somewhere.

What's the verdict?
Brasil is a fun product and one that will make your friends think that you have been slaving over your cocktail shaker.  The reality is that you can create good, refreshing drinks with a minimum of effort.  It is also being released at a very competitive price and in time for the World Cup.  If you want to get in the mood for that festival of football by drinking something a bit different, then you should give Brasil a go.

Will the phenomenon of flavoured whisky-based spirit drinks last?  The genre certainly shows no signs of abating, so we don't see why not. We have tried a number of them and some are better than others.  Some will fall by the wayside, but Brasil is one of the better ones and should be successful.  There has been criticism from some quarters of the online whisky community about them, but if they bring new people in then that can only be good.

Further information and ideas for other cocktails and uses can be found at the new dedicated website www.mixitwithbrasil.com, which includes a series of tutorials from leading bartenders.

Hello from Toronto Canada. I just wanted to add to the selection of spirit drinks you mentioned the new Dewers Highlander Honey. Well, new to us anyway. It's still government run here so we're at thier mercy. It's sweet forward on the nose but at 40%ABV, not as thick as the Balentines Brazil. Lots of honey on the palete with the barley coming in from behind. I quite enjoyed it for being the "don't mess with my scotch" guy that i can be. Reminded me of that German honey liquer, but again, not as thick and sweet. Love the Whisky Feed. Cheers.

eToro is the best forex trading platform for beginner and full-time traders.