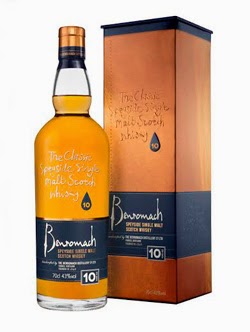 Benromach - Re-branding begins
The small Speyside distillery of Benromach, owned by independent bottling company Gordon & MacPhail, have announced a major re-branding for its award winning single malts.  This begins with new packaging for their flagship 10 years old expression.  Gone are the old bottle and metal tin.  In are a new bottle shape and a copper foil coated box, both of which are influenced by the stills at the distillery.

The new look has been designed by Stuff Creative, an Edinburgh based agency, and features embossed lettering and cut foil on the label to give a tactile feel.  The lid of the box also doubles as a plinth for displaying the bottle.  The re-branding will be supported by the launch of a new website, featuring short films documenting Benromach's story and the hand crafted nature of their single malts.

Bowmore - New UK release
The popular Islay single malt brand of Bowmore have announced the release of its limited edition Laimrig bottling in to the UK.  This is the first time that it has officially launched to that market and it will initially be available exclusively through The Whisky Shop, the UK's largest high street whisky retailer.

The Laimrig, which translates as 'pier' from Gaelic and celebrates the stone pier of Bowmore harbour which is next to the distillery, is bottled at 15 years of age and the natural cask strength of 53.7% ABV.  It has been finished in ex-sherry butts and will cost £70 a bottle.  Stock will be available in each of The Whisky Shop's 22 UK stores at the end of April, but you can pre-order a bottle now via www.whiskyshop.com.

English Whisky Co - Another chapter
The Norfolk based English Whisky Company have announced the latest bottling of their Chapter 13 single malt.  It is being released to celebrate St. George's Day on April 23.  This year's bottling features artwork designed by illustrator Emma Garner, who won a recent competition to design 'an inherently English' label.  It is bottled at 45% ABV and there will be just 1,499 bottles, costing £49.99 each.  They will be available from specialist whisky retailers and via www.englishwhisky.co.uk. 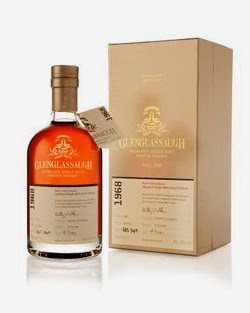 Glenglassaugh - The first batch
The east Highland distillery of Glenglassaugh has today announced the release of Batch #1 of single casks.  The distillery, which is owned by the Benriach Distillery Company, has finally followed its sibling distilleries of Benriach and Glendronach in releasing a single cask/cask strength collection.  There are eight casks in total, all of which were hand selected by Managing Director Billy Walker.

The oldest in the collection was distilled in May 1968, while the youngest is from February 1986.  All are presented in a golden toughened cardboard box with information about the whisky on the label of box and bottle..  Details of the eight bottling s are listed below.  No pricing was attached to the press release.


Sales Director Alistair Walker said: “We took over Glenglassaugh last year and were thrilled to discover a treasure trove of old and rare spirits slumbering in the warehouses.  Selected for their excellence and personality and bottled last month, this is an extraordinary collection of rare casks. They are stunning examples of Glenglassaugh at its finest.”

Glengoyne - Quarter century up
The independently owned Scottish distillery of Glengoyne have announced the latest and oldest addition to their core range of single malts - the Glengoyne 25 years old.  The whisky has been created from hand selected ex-sherry casks, which have been maturing for over a quarter of a century.  It is presented in a heavy glass bottle and oak casket featuring a metal stopper and engraved plinth.  The bottling will be available shortly in specialist retailers or via www.glengoyne.com.  The cost will be £250 a bottle.

Iain Weir, Marketing Director for Ian Macleod Distillers (Glengoyne's owners), said: “The Glengoyne 25YO is an extremely special malt. Matured in our traditional dunnage warehouses for 25 years in the finest European oak sherry casks, unchill-filtered and bottled at 48%ABV.  A perfect after dinner dram.”