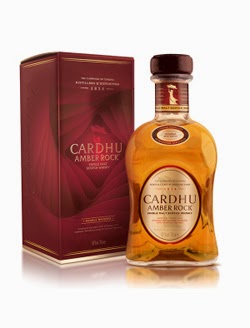 The Amber Rock is the latest single malt to be released by the popular Speyside distillery of Cardhu (pronounced car-doo).  It will sit alongside the 12, 15 and 18 years old expressions, plus the Special Cask Reserve in the brand's core range.  To create this new release, the whisky has been double matured in toasted American oak casks and is designed to deliver extra hits of citrus, honey, vanilla and wood spice.

The distillery is currently owned by Diageo and it has an annual production capacity of two million litres. Only 30% of this is released as Cardhu single malt. The other 70% contributes as a major ingredient for the famous Johnnie Walker range and other blended whiskies in Diageo's portfolio.  Cardhu sits comfortably in the world's Top 10 for single malt sales with the majority being exported to southern Europe - Spain is the main market, along with France, Greece, Italy and Portugal.

Cardhu Amber Rock is named to reflect the combination of the whisky's colour and the distillery's Gaelic name, and is bottled at 40% ABV.  It will initially be available shortly in Belgium and France only.  Other European markets (those listed above plus Holland, Switzerland and the UK) will follow in the Summer. The recommended retail price will be £41/€50 a bottle.

Our tasting notes
The colour is golden amber (unsurprisingly) and the nose has a lovely mix of initial fresh aromas - these include dried apple, caramel, cinnamon bark and robust sweet malted cereals.  Underneath there are further aromas of honey, vanilla and plenty of orange oil.  This increases with time, as does the woody cinnamon spice.

On the palate, this whisky is vibrant, tangy and sweet.  The tangy nature is driven by an intense citrus note, which is most reminiscent of bitter orange zest with a lemon juice note adding pleasant sharpness.  The sweetness has a brown sugar and honey-like edge to it, and this becomes more prominent with time in the mouth.  It evolves in to burnt caramel or honeycomb.  The other main elements are the robust malty cereals from the nose, which add a delicious bittersweetness, and an increasingly influential note of wood spice (think of cinnamon and nutmeg especially).  This adds a warmth and depth.  Late notes of dried apple and vanilla round things off.

The finish is again vibrant and begins with the same sugary honey-like sweetness as on the palate.  As this and the citrusy fruit notes fade, the bittersweet cereals and woody spices come to the fore.  This results in the finish becoming quite dry and mouth watering.

What's the verdict?
We like the freshness and vibrancy of this new Amber Rock.  Part of this is because it simply tastes and smells very good.  Part is because it offers something different from the other expressions of Cardhu in the core range, which are on the richer and sweeter side.  It is very easy drinking and would be great for a beginner.

Amidst all of the current 'no age statement' bashing that is going on around the online whisky community, here is a new 'no age statement' whisky that offers plenty to the consumer and is being launched at a decent and competitive price.  As a result it is well worth checking out if you get the opportunity ...

eToro is the #1 forex trading platform for newbie and pro traders.