Within Inbox we aim to write a few lines detailing each press release/piece of news/PR event that we have received and provide links, where possible, for you to find out further information.  We were busy due to work commitments and the Easter break last week and did not have time to write Inbox.  Sorry about that - here is the news that has caught our attention from last week and this week ... 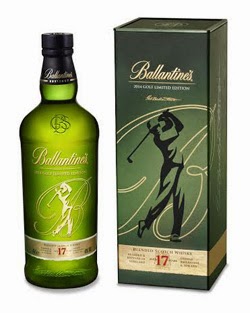 Ballantine's 1 - Golf packs
The famous blended Scotch whisky brand of Ballantine's has launched a  limited edition package to celebrate its continued support and collaboration with the world of golf.  The packaging and bottle is adorned with gold lettering and a golfer in full swing, with the brand's B logo in the background.  The 17 years old (pictured) is accompanied by the 21 years old expression, which is presented in cream packaging.  They are available now in China, Poland, South Korea and Taiwan plus Asian travel retail. 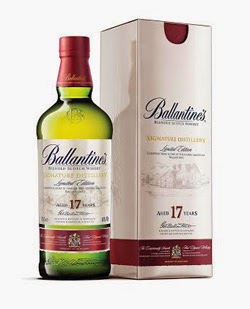 Ballantine's 2 - Final Signature
The brand has just announced the fourth and final release in its limited edition Signature Distillery blended series.  The collection highlights the four main distilleries that contribute to Ballantine's.  All have been bottled at 17 years of age and this final expression showcases the Speyside distillery of Glentauchers in the blend.  The other three are Glenburgie, Miltonduff and Scapa.  It will be released shortly in China, Japan and South Korea plus Asian travel retail.  The cost will be $78 USD/£44.50.

Sandy Hyslop, Ballantine’s Master Blender and the creator of the series, comments: “We're proud to provide the opportunity to experience the single malts that shape the taste profile of Ballantine’s 17 years old, and to show the quality of the single malt produced at Glentauchers distillery. Lighter and more delicate in style, this whisky highlights some of the more subtle flavours within the original blend, whilst showcasing the key contribution of the Glentauchers malt with a lingering finish of soft berries.” 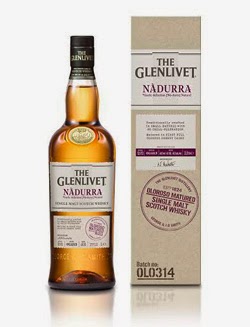 Glenlivet - New series and bottling
The Glenlivet, the world's second largest selling single malt whisky, have announced plans to create a range of their popular and award-winning Nàdurra whisky.  The series will highlight the different types of casks used at the distillery.  The original Nàdurra (which is matured solely in ex-bourbon casks) will be joined firstly by an expression solely matured in first fill ex-sherry casks, and then others at later dates.

The Glenlivet Nàdurra Oloroso is the first major release, excluding single casks, to be solely matured in ex-sherry casks.  It will be initially exclusive to European travel retail and will be launched in Frankfurt and Heathrow Terminal 5 in May, before being rolled out to domestic markets later in 2014.  The whisky has no age stated and is bottled at 48% ABV.  The recommended retail price is €55/£46.

Nikki Burgess, Global Brand Director for The Glenlivet at Chivas Brothers, comments: "The Nàdurra is the purest expression of The Glenlivet that captures the original passion and production methods of the distillery. We know that whisky connoisseurs appreciate these qualities at the heart of the range, and by expanding the Nàdurra range we aim to consolidate our strong and innovative offering in the craft single malt arena."

Skypak - Whisky trolleys
A couple of weeks ago we were contacted by Skypak, a German design company who have created on of the coolest whisky related products that we have seen for a long time.  The Whisky Trolley is a portable drinks cabinet that has been made by combining airline cabin trolleys with wood from whisky casks.  There are two versions - one using wood from Scotch whisky casks and one using wood from Jack Daniel's casks.

The trolleys have a number of features - a stainless steel frame to increase durability, a locking door, brakes to lock the trolley in place, interior shelving, an ice drawer and scent left over from the whisky in the casks.  Each trolley is bespoke and handcrafted in Germany.  They weigh just 21kg.  They can also be produced using ex-Cognac, rum or sherry casks.  However, they are not cheap - both models retail for €1,980 (£1,650).  To purchase or for further information, please visit www.skypak.de.

*GREAT NEWS* - The guys at Skypak are offering all Whisky For Everyone readers a 10% discount off either model until May 1st 2014.  Simply use the voucher code 'whiskyonwheels' when prompted and the discount will be applied.

Stronachie - New addition
The single malt released by independent bottling company A.D. Rattray have announced a 10 years old expression of their Stronachie single malt.  The bottling coincides with the 110th anniversary of the original Stronachie single malt, which was first sold in 1904.  This joins the current 18 years old version and both will sport newly designed packaging, which harks back to that of the first ever bottling.  No details of price have been given.

Stronachie was an old single malt produced at a Highland distillery of the same name between 1890 and 1928.  A.D. Rattray distributed the whisky and revived it after buying an original 1904 bottle at auction some years ago.  The current malt is made at the Benrinnes distillery, which was found to be the closest match to that original.  The official launch will be at a special event held at A.D. Rattray's Whisky Experience & Shop in Kirkoswald, Ayrshire on Friday May 16 at 6-8pm.  The launch will be supported by a competition on Facebook. 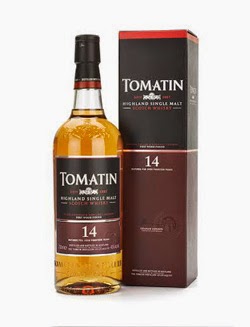 Tomatin - Two in, two out
The Highland distillery of Tomatin has announced two new expressions for its core range and also a revision of that core range.  In comes a 14 years old Port Finish (pictured, left) and the 1988 Vintage, while the 15 and 30 years old expressions depart.  They will join the non age statement Legacy, which is matured in a combination of ex-bourbon and virgin oak casks, plus the 12 and 18 years old expression which are predominantly matured in ex-bourbon but are bith finished in ex-Oloroso sherry casks.

The Port Finish has spent 13 years maturing in ex-bourbon casks before being transferred to extremely old ex-Port pipes for a further year.  It will be bottled at 46% ABV and will retail at a recommended price of £48.99.  The 1988 Vintage is a vatting of ex-bourbon and ex-Port casks, and is limited to just 2,500 bottles in the first batch.  Further batches will follow in time.  It is bottled at 46% ABV and will cost £159.99 a bottle.  Both expressions will be available in specialist whisky retailers worldwide.