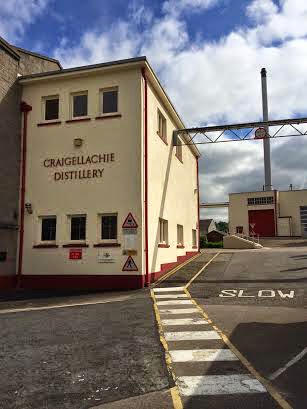 Last month John Dewar & Sons announced The Last Great Malts programme.  This sees the company, which is owned by multi-national drinks company Bacardi, releasing a range of single malts to showcase their five Scottish distilleries.  Four of these - Aultmore, Craigellechie, Macduff and Royal Brackla - have never had a range of malts available before, while the existing Aberfeldy range has been revamped and expanded.

Craigellachie is the first of the four to appear on the market - read our thoughts and tasting notes on the range here - and prior to the launch Karen and Matt C were invited to the distillery, which is not open to the public ...

Craigellachie (pronounced craig-el-ack-ee) is located on the outskirts of the Speyside village of the same name and translates as 'rocky hill' from Gaelic. The distillery sits on said hill and looks over the village. It was founded in 1891 by Alexander Edward, a villager who had inherited the nearby Benrinnes distillery, and Peter Mackie, who already owned the Lagavulin distillery on Islay and the White Horse blended brand.  The buildings were designed by renowned Victorian distillery architect Charles Doig.


Our tour began with a brisk walk along the road to Dufftown, which wound up the hill and away from our hotel and the village of Craigellachie.  The distillery appeared from behind a big grassy bank as we approached.  We were welcomed with a 'Scottish breakfast' in the Distillery Manager's office.  Following that we embarked on the tour and were guided around by Stephen Marshall, the Global Brand Ambassador and mastermind behind The Last Great Malts series.


Craigellachie is a large distillery with an impressive annual production capacity and this was reflected in most aspects of production.  Our first stop was the mill.  The malted barley is produced for Craigellachie at Glenesk Maltings in Montrose and they are the only single malt distillery to use malt from a specific kiln there.  This kiln is oil fired, which is unusual these days, and gives a characteristic heavy sulphuric note to the malt.  This is stored in a series of malt silos prior to milling.


The next stop was the mash tun, which was housed in the old kiln.  It was difficult to determine whether the mash tun was massive, the kiln space small or a combination of both.  The result was a cramped room with very little space to move around the tun, which was manufactured by Steinecker and installed in 2001.  They currently run 21 mashes per week.  The main other feature of the room was the impressive wooden beaming that formed the pagoda roof on the inside of the former kiln.


We moved through to the fermentation room.  There were eight wooden washbacks lined up with  four either side of the room.  These are made of larch and the fermentation time at Craigellachie is around the 60 hour mark.  The water used in the fermentation, and in the other parts of the production processes, is taken from a spring called 'Blue Hill' and this is located in the Little Conval hills close to the distillery.  Here a 40 foot (12 metre) high dam collects the water and this then flows down to be used at the distillery.


Next was the impressive spacious and bright still room, which has an entire glazed front and very high ceiling.  It almost had a cathedral-like quality and feel.  Here four large copper stills stand - two wash stills that complete the first distillation and two spirit stills, which produce the final spirit.  These must be some of the largest in Speyside and dwarfed those standing next to them (see, below). Between them they will produce almost five million litres of spirit this year.  Most of what is produced at Craigellachie is used is the popular Dewar's range of blended Scotches.


Our final treat was to be taken outside on to the roof to view the traditional wormtub condensers.  These consisted of a huge cast iron tank filled with water that has a coiled copper pipe which leads from each still and down through the water.  This cools the copper piping and condenses the alcohol vapours back to a liquid once it experiences the cooler environment.


Craigellachie is one of the few distilleries remaining in Scotland that continue to use wormtub condensers ( - we have visited some of them at Glen Elgin, Royal Lochnagar and Pulteney) and this gives the spirit a characteristic heavier edge.  Most now use the modern column condenser system.

We thoroughly enjoyed our visit to Craigellachie.  It is a lovely distillery and one that could easily accommodate being open to the public.  This is especially true considering its central Speyside location and being within a village, its size and the recent development of a single malt range by the owners.  Hopefully it may have a visitor centre and run tours in the future.

The new Craigellachie range (pictured, above) has a number of expressions of different ages. The 13, 17 and 23 year olds have recently appeared in specialist whisky retailers and are priced at £50, £95 and £385 respectively. The 19 years old expression is to be exclusive to the travel retail sector, while the 31 years old will be available next year. Price of these two have not been revealed to date. They are all released at 46% ABV and are non chill-filtered.

posted by Whisky For Everyone at 9:21 PM