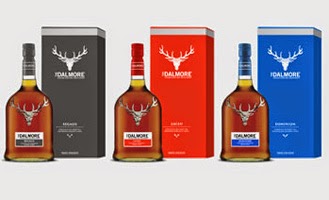 The north Highland distillery of Dalmore has announced a new range of travel retail exclusive whiskies, which will be available from Spring 2015.  The Fortuna Merita Collection will feature three new single malts - the Regalis, the Luceohas and the Dominim.  All the casks included in the bottlings have been selected by Richard Paterson, the Dalmore Master Blender.

The Regalis is the entry-level malt in the range and has been matured in American oak casks, before being finished in ex-Oloroso sherry butts.  It will cost €75 a bottle.  The Luceohas has been matured exclusively in ex-Oloroso sherry butts, as has the Dominim.  They will retail for €85 and €120 respectively.  They will all be available from next April, initially in Europe travel retail.

The Glenlivet - Founder's inspiration
Chivas brothers, the owners of the famous Speyside single malt brand, have announced a new permanent expression to sit in the core range of The Glenlivet.  The Founder's Reserve was unveiled at a launch event in London earlier this week.  The new whisky has been crafted by Alan Winchester, the legendary Master Distiller at The Glenlivet, and is designed to pay homage to the style of whisky created by the distillery's founder George Smith.

The Founder's Reserve has been matured in first-fill American oak casks and will be available globally from Spring 2015.  It is designed to sit next to the best selling 12 years old expression in the range and will be priced similarly.

Laurent Lacassagne, Chairman & CEO of Chivas Brothers, told those at the launch: “Founder’s Reserve brings to life the heart and soul of The Glenlivet - at its core is the perfectly balanced smooth and fruity flavour that The Glenlivet is renowned for. We are proud to introduce this new expression during what has been an incredible 12 months for the brand.”

What else has caught our attention this week?

Aultmore - click here for more info
Bacardi have released a range of single malts from their Aultmore distillery.  It is the third distillery out of their five in Scotland to enter the bigger Last Great Malts range, after Aberfeldy and Craigellachie.

Balvenie - click here for more info
The famous Speyside distillery release the latest and oldest edition in the Single Barrel range - a 25 years old expression matured in 'traditional' American oak casks, which are released one at a time.


posted by Whisky For Everyone at 7:21 PM