The Port Cask Finish is a new expression to be launched by Glen Moray, the popular Speyside single malt distillery.  It sees the regular Classic matured in Tawny Port casks for an additional eight months.  This new release is designed to sit alongside the best selling Classic, the distillery's flagship malt, the 10 years old Chardonnay Cask and the 12 and 16 year olds in the core range.  This is bottled at 40% ABV and is of natural colour.  It will be widely available in both specialist retailers and supermarkets.  A bottle has a recommended price of £25.

The Glen Moray distillery is located in the Speyside region of Scotland, sitting on the outskirts of the town of Elgin on the banks of the River Lossie. The distillery started life as a brewery, founded in 1828, which was later converted to become a whisky distillery in 1897. It is currently owned by French drinks company La Martiniquaise, who took control in 2008 after buying the distillery from Moet Hennessey.  They have embarked on a massive expansion programme since then with the ultimately goal to get the annual production up to the 6.5 million litre mark.  It is currently 3.3 million litres. 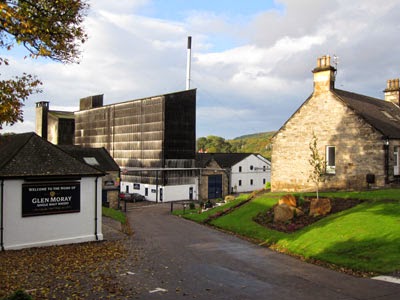 The whisky produced Glen Moray (pictured, above) is used for a number of La Martiniquaise's own blended whiskies that are popular in France, namely Label 5 - one of the world's fastest growing brands - and Glen Turner, as well as an expanding range of single malts. The main market for Glen Moray single malts is the UK and most of the stock allocated for this is matured in the distillery's dunnage warehouses on site.

Our tasting notes
The colour is deep gold with a distinct ruby tint and the nose is lively and aromatic.  The first aromas to show are those of warm toffee and caramel, and these are followed by red and dried fruits (think of raisins and currants especially).  There are also nutty and spicy elements that begin to come through and all of these richer aromas are complimented by a fresh grassiness.

On the palate this whisky feels creamy and soft.  It seems to coat the inside of the mouth with a pleasant sugary note.  This has an element of crumbly brown sugar, but mostly toffee and caramel to it.  Then come some vanilla and honey, and this adds to the soft feeling.  Underneath are notes of dark dried fruits (the raisins and currants again) and fresher red fruits (think of strawberries and dried cranberries).  The combination is reminiscent of Christmas cake.  As with on the nose, these richer and sweeter notes are complimented by a fresh, grassy notes that lifts everything.  Background hints of burnt orange, cream soda and cinnamon round things off.

The finish is of decent length and is warming.  There is a golden syrup-like note that hangs around in addition to the toffee/caramel from before.  Again the dried fruits are present and fade to reveal further warming cinnamon spice and a lovely malty cereal note.

What's the verdict?
This is a delicious whisky and one that reassures us that Glen Moray will be OK, despite its rapid redevelopment and expansion.  The quality belies its lowly price point and instantly makes it one of the best whiskies available for around £25.  We think that it could easily sell for a higher price.

It may not be the most complex single malt but offers plenty in terms of aroma, flavour and depth.  This makes it a perfect and uncomplicated malt for beginners, plus a great value one for the more experienced whisky fan who wants to try something a little bit different.

Glen Moray, the cheapest single malt in, if not the world, then certainly Australia. I've had the 10 year old and didn't mind it, though I'm curious about this port-wood number (I've got a soft sport for port finishes). I'll have to check it out if I can find it! Also, what are your thoughts on the Chardonnay release?

That is amazing! private group tour temecula This kind of displays most of us very best regions so that you can raise the web site. I really do have confidence in which in turn every once in awhile at some time swiftly I would examination to make a guideline so that you can accompany your website, even so most of us will surely possess. Useful write-up joined having profitable principles plus views.