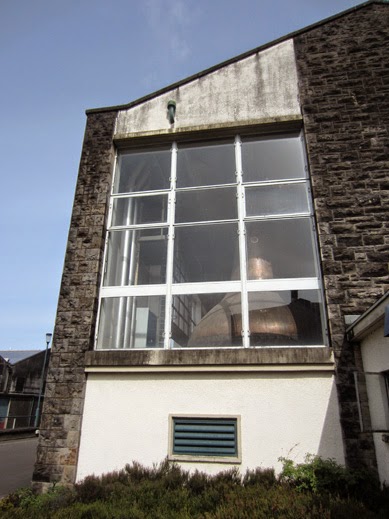 At the beginning of May, we paid a visit to the annual Spirit of Speyside Festival. One of the highlights of our trip was a special tour, which is only run once a year during the festival, called The Laich of Moray. This tour takes in four of Diageo's single malt distilleries around the Elgin area of Speyside that are not normally open to the public - Glen Elgin, Glenlossie, Linkwood and Mannochmore.  Our guide for the trip was Eric Walker, the Senior Site Manager in charge of the four distilleries. The final stop on the tour was Mannochmore ....

Mannochmore was founded in 1971 by the Scottish Malt Distillers (SMD) company and was built on directly next to their Glenlossie distillery, which is located in the tiny hamlet of Birnie.  This is a few miles south of Elgin.  The distillery was closed for four years during the 1980s, re-opening in 1989.    Mannochmore is probably best known for being the home of Loch Dhu - the infamous black whisky, an experiment that was withdrawn after three years on the market in 2000 but one that is now sought after by whisky collectors.

Our guide for the tour was Stephen Woodcock, the Site Operations Manager for Mannochmore.  The architecture of the distillery was functional rather than aesthetic and similar to most others that were built in the 1970s.  This was reflected in the 'low key' entrance to the production area (pictured, above).  Once inside, the distillery had a much more modern feel.  This is due to the Mannochmore being significantly renovated and expanded in 2012 - it was closed for most of the year while the work was carried out and the result was that it has doubled capacity from three to six million litres per year.


The first thing that struck us was the huge mashtun.  This was housed at one end of a vast open plan room that also had the fermentation washbacks at the other end.  This holds around 11 tonnes of mash and is different from those at most other single malt distilleries as it has no underback - this is the vessel that that stops any solid matter leaving the mashtun as the wort flows out and works like a u-bend in a toilet. This model of mashtun is more commonly found in the beer brewing industry and they currently run 20 mashes per week.


The other two thirds of the large open plan room were taken up with the eight wooden fermentation washbacks.  Like the mash tun, these seemed massive.  Each holds 54,000 litres of liquid and each fermentation is around 100 hours.  The fermentation yeast dies after about 40 hours and the extra time allows the wash to develop the extra fruity characteristics that makes Mannochmore whisky highly sought after by blenders.  The large scale of the distillery was further emphasised when were taken outside by Stephen, who revealed a further eight stainless steel washbacks outside.  Between them, these washbacks produce 26 washes per week.


Our next stop was the still room.  This had a light and airy feel thanks to the entire front being glazed.  These panels can be rolled up so as to regulate the heat in the still room.  The imposing stills were large with wide bottoms, tall necks and long lyne arms.  Each of these characteristics contribute towards making Mannochmore's spirit light, delicate and fresh.  The vapours have to struggle to the top of the neck and then get maximum contact with the copper as it re-condenses to a liquid.  It also creates plenty of reflux, meaning that some of the spirit runs back in to the main body of the still, which again adds to character.


The stills produce just above five million litres of spirit per year.  Unlike many of Diageo's distilleries this spirit is filled to cask on the site and then goes for maturation in the neighbouring warehouse complex.  These warehouses are massive and house around 200,000 casks of maturing whisky from Glenlossie, Mannochmore and numerous other Diageo distilleries in Speyside.  The site is also home to a dark grains plant and a new energy saving biomass burner.


The dark grains plant is huge and processes draff (the residue left in the mash tun once it has been drained following mashing) and pot ale (the liquid left in the stills after distillation) from a total of 21 distilleries around Speyside.  The moisture in the draff is taken out and the pot ale reduced to a thick syrupy liquid, before the two are combined and dried to form animal feed pellets.  The biomass burner makes Mannochmore more energy efficient and means that much of the energy used is recycled back in to the system.


We can highly recommend The Laich of Moray tour and would like to take this opportunity to thank Eric and the four Site Operations Managers that showed us around their distilleries.  It was particularly interesting to see because the four distilleries are not open to the public and we have always enjoyed these style of 'warts and all' tours, as you get to see the real character of a place beyond the shiny equipment and copper stills or a plush visitor centre and cafe.

The Spirit of Speyside Festival 2015 runs from April 30 to May 4, so watch out for next year;s tour being announced on www.spiritofspeyside.com.

posted by Whisky For Everyone at 7:17 PM