Extra has a strength of 40% ABV and will be available in domestic markets shortly.  It will then also be available in travel retail from March next year.  No details of price were given in the press release. 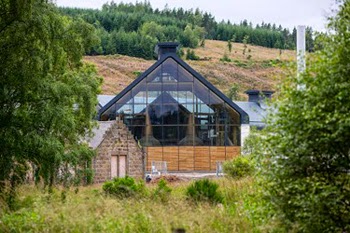 Chivas Brothers have announced that construction has been completed on the new Speyside single malt distillery of Dalmunach.  Production is expected to commence later this month.  Dalmunach has been built on the site of the old Imperial distillery in the centre of Speyside and the design draws inspiration from elements of nature, which uses the latest environmental and technological innovations.

Dalmunach is Chivas Brothers' 14th malt distillery and is named after a pool by the nearby River Spey.  It will produce an expected 10 million litres per year, which is destined to be used in the popular blends of Ballantine's, Chivas Regal and Royal Salute.  Production features include a 9.5 metre diameter mash tun, 16 stainless steel wah backs and eight copper pot stills.  The distillery will not be open to the public but can be seen from the popular Speyside Way footpath.

Laurent Lacassagne, Chairman and CEO of Chivas Brothers, commented: “As global demand for Scotch whisky increases year on year, our confidence in the long-term growth prospects for the category remains strong. The construction of the new Dalmunach distillery is a clear demonstration of our confidence and also of our commitment to invest to meet the significant growth potential. We believe the increased capacity will help to drive the business forward in the years to come.”

Teeling - Single Malt is here
The Teeling Whiskey Co, Ireland's leading independent whiskey company, have announced the release of a new single malt for their core range. The Teeling Single Malt is one of just a handful of true Irish single malts on the market.  The whiskey combines aged malts, which have been matured in five different types of wine cask - Cabernet Sauvignon, Madeira, Port, Sherry and White Burgundy.  The oldest whiskey included is aged for 23 years.  It is bottled at 46% ABV, is non chill-filtered and of natural colour.

Jack Teeling, founder of the Teeling Whiskey Co, commented, “We are delighted to be able to release another expression of Teeling whiskey that helps expand consumer choice and challenge existing perceptions of Irish whiskey. Our new Teeling Single Malt proves Irish whiskey can have big bold flavours that appeal to Single Malt drinkers without losing its distinctive Irish identity.”

posted by Whisky For Everyone at 4:00 AM