The Ardmore distillery is located in the village of Kennethmont, which sits amongst the rugged hills of the east Highlands and is about 45 minutes drive west of Aberdeen. It is a large distillery and one that is not open to the public.  However, Matt C was recently invited for a behind the scenes tour by owners Beam Suntory.  This was to celebrate the launch of their Peated Malts of Distinction initiative, which includes the introduction of the new Ardmore Legacy expression - to read Matt's review of that, click here.

Ardmore was founded by William Teacher & Sons in 1898 so as to give them a consistent and constant supply for their increasingly popular Teacher's blended Scotch. The distillery was designed by renowned architect Charles Doig, who was paid £1000 to draw up the plans, and the whisky produced there has featured in the Teacher's range ever since.  It has been running continuously since the first mash took place in 1899.

Did you know?
The train station at Kennethmont is now closed but the signal box, which sits opposite the distillery, is still in operation. It marks the highest point on the Aberdeen-Inverness railway line. The line was vital to the early success of Ardmore and the distillery had its own sidings where all supplies arrived and filled whisky casks collected.  The nearest serviced railway station is at Insch two miles away.


The location was chosen by the Teachers as it was close to the traditional east Highland barley fields and its proximity to the River Deveron.  Both could supply a sufficient amount of the raw materials needed for whisky making.  Today, Ardmore uses malted barley with a peating level of 12-14 PPM (Phenol Parts per Million) and this is produced using Aberdeenshire peat.  The water is collected from 16 natural springs on the nearby Knockandy Hill and they use 1.7 million litres from these per week for all aspects of production.


The guide for the tour of Ardmore was Alistair Longwell, the Distillery Manager. We began in a small room that was home to numerous pieces of Teacher's memorabilia and Alistair explained about the history of the Teacher's brand and the Ardmore distillery.  He also talked about Ardmore's eagle logo and their collaboration with the RSPB (The Royal Society for the Protection of Birds) and sponsorship of the sea eagle re-introduction programme.

Did you know?
Teacher's was the first commercial whisky to use cork stoppers in their bottles instead of screw caps and in 1972 became the first blended Scotch to sell over one million cases per year in the UK.  William Teacher & Sons also owned the largest chain of pubs in Glasgow between the 1850s and 1940s. Pictured is an old hand written ledger from the Teacher's archives.


We moved through to the malt storage area.  This was home to 16 malt bins - 12 with a 90 tonne capacity and four smaller ones with a 50 tonne capacity. A total of 1,380 tonnes of grain can be stored in these bins.  Until the mid-1970s Ardmore did its own malting and the floors where this took place are still there.  Now all malt is delivered to the site.  As mentioned, the malted barley contains some peat smoke and phenols but since 2001 the distillery has also been producing a small amount of spirit using unpeated malt.


This is called Ardlair (or 'Ard-less' as Alistair told us that it is affectionately known as by distillery workers) and is predominantly used in blends.  It has been used for the first time in a malt in the new Legacy expression, where it is combined with the regular peated spirit.  When smelling and tasting them side by side, both were sweet but the soft peat was very evident in the Ardmore malt.  The mill at Ardmore is a Boby Mill and this can grind a staggering 12.5 tonnes of malted barley in just two hours.

The next stop was the mashing room, where the slightly antiquated-looking mash tun is housed.  This and the surrounding fixtures are painted bright red, and the tun is enclosed with a huge copper dome.  Here the milled malt, called grist, is mixed with warm water so as to extract the soluble sugars that are needed later in the process.


During each mashing process, the tun is filled with 12.5 tonnes of grist and 65,000 litres of water.  They are currently operating 25 mashes per week.  The water is warm and added in three separate complete runs, with the temperature increasing each time so as to maximise the amount of sugars extracted.  The three temperatures are 64°C, then two much higher waters at 95°C and finally 98°C.  The final solution is called wort.


We then moved through to the fermentation rooms.  Ardmore has 14 washbacks, which are wooden and made from Douglas fir, and this is where the sugars in the wort are turned in to alcohol with the addition of yeast.  Four of the washbacks hold 90,000 litres and the other 10 hold 45,000 litres.  The fermentation time at Ardmore is 53 hours and the resulting liquid, called wash, has an alcoholic strength of 8.6% ABV.  Alistair very kindly allowed us to taste the wash from one of the washbacks that had almost completed its cycle and it tasted like a smoky wheat beer.


The still house at Ardmore is very impressive.  The eight shiny copper stills sit in a line - a pair of wash stills, where the first distillation takes place, sit at either end with two pairs of spirit stills in the centre.  This is where the second distillation takes place and from where the final new make spirit is collected.  Each wash still has a 15,000 litre capacity and runs for six and a half hours.  Each spirit still has a capacity of 15,500 litres and runs for eleven and a half hours, of which the new make spirit is collected for just two hours.


Ardmore's stills were some of the last in Scotland to be coal fired.  The coal fires were decommissioned in 2001 but can still be seen by going down some steps to the still house floor, as shown above.  Alistair opened one of the fire doors and showed us inside, explaining that stillmen were required to crawl inside and clean the connecting pipework on a regular basis.  Between them, the stills produce 5.5 million litres of new spirit per year.


Our final treat was a tasting with Alistair in Warehouse No.5.  This is one of numerous warehouses on site and where malt destined to be bottled as Ardmore or used in the premium expressions of Teacher's are left to mature.  Here, Alistair told us that most casks used at Ardmore were made of American oak and had previously been used to mature bourbon, although they also use a small percentage of ex-sherry casks made from European oak.


Alistair also explained that Ardmore had previously made many of its casks in its own cooperage, which was located opposite and across the courtyard from Warehouse No.5.  This closed in the late 1980s.  During the sampling we were treated to a dram of the new Legacy, which had just been launched, plus a couple of 'experiments' that are in progress and earmarked as potential products.  The finale was the tasting of a sample a 34 years old directly from the cask, which is the oldest whisky that they have maturing at Ardmore. 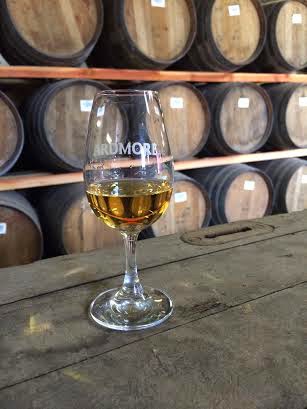 Did you know?
The first proprietary single malt from Ardmore was only released in 2007.  This was called Traditional Cask and was joined shortly afterwards in 2008 by a 25 years old expression and a USA exclusive 30 years old.  The Legacy has just been released to replace the Traditional Cask and this will be joined by further new expressions in 2015.


Ardmore is a great distillery and although large, it manages to retain plenty of character.  It is a shame that it is not open to the public, as it would be perfectly suited to having a visitor centre.  A number of reasons lead to this conclusion - its location (it's not really that far from Aberdeen), its link and importance to a major brand (Teacher's) and its traditional feel.  It could easily become a destination like The Famous Grouse Experience at Glenturret or The Arthur Bell Centre at Blair Athol.

We would like to take this opportunity to thank Alistair and Beam Suntory for the invite, tour and hospitality during the visit.

posted by Whisky For Everyone at 10:49 PM