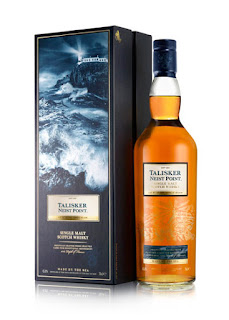 The Neist Point is a new single malt from the famous Talisker distillery on the isle of Skye and is exclusive to the travel retail sector.  It joins the fellow travel retail exclusive Dark Storm expression. Talisker is located on the isle of Skye, the largest and most northerly island of the Inner Hebrides. It is the only distillery on the island and is found close to the village of Carbost, in the shadow of the imposing Cuillin hills.  This new permanent release is made from a selection of rare casks of different ages - all are made from American oak and most are refill casks.  It is named after the most westerly point of Skye, which is home to the Neist Point lighthouse.

Talisker was founded in 1830 by two local brothers, Hugh and Kenneth MacAskill, and has a current annual production capacity of around three million litres. Talisker is currently owned by Diageo and they have given the brand plenty of promotion recently. Worldwide sales have risen by over 100% in the last five years and it is now Diageo's best selling single malt behind only the Singleton range (which includes the three distilleries of Dufftown, Glendullan and Glen Ord) and Cardhu.  Despite its remote location it is one of the most visited distilleries in Scotland with over 60,000 visitors per year. For more information on tours - visit Diageo's informative website www.discovering-distilleries.com.

Talisker Neist Point is available through travel retail stores worldwide, with the initial release going in to western Europe and the USA, and is bottled at 45.8% ABV.  It is presented in a 70cl bottle, which is housed within a fold-out presentation box that depicts the Neist Point lighthouse and headland.  The recommended retail price is £115, €147 or $179US.

Our tasting notes
The colour is golden yellow and the nose has immediate notes of malted cereals, caramel and distant bonfire smoke.  Further sweet aromas develop and these include toffee, salted caramel, milk chocolate and cocoa.  Hints of savoury notes including burning bonfire embers and fresh yeasty bread dough are also present.

On the palate there is an initial interesting mix of fruity, sweet and peppery notes.  The fruitiness has elements of fresh green apple and pear and sultanas, along with a late hint of candied orange peel.  These notes are supported by a delicious sweetness that is most reminiscent of a combination of toffee, butterscotch and vanilla.  A hint of white chocolate accentuates the sweetness.  The peppery peat smoke is never far away and this has a pleasant heat to it, which has a note of raw green capsicum/chilli to it.  Further depth and complexity is added by evolving earthy wood spice - think of ginger, cinnamon, nutmeg and star anise.

The finish is very long and warming with plenty of bonfire ash, liquorice and vanilla evident.  As the sweet toffee and fruit characteristics begin to fade the lingering peat smoke seems to become more bitter, especially when a late hit of fresh ginger and eucalyptus appears.

What's the verdict?
This is an excellent whisky from Talisker and one that shows how good the often experimental world of travel retail whiskies can be.  Many brands now use the market to produce new and innovative products that concentrate on flavour, rather than more traditional factors.  With this new release and the Talisker Dark Storm, they now have two of the best examples out there.

The complex mix of flavours and characteristics in Neist Point give it great depth.  We have revisited it a couple of times since the launch event and it keeps on revealing new things.  It also takes water very well - this makes it softer and sweeter with the fruitiness pushed forwards (especially the apple and orange notes) and the smoke pushed back to become more whispy and soft.  Definitely one of the highlights of 2015.

posted by Whisky For Everyone at 8:02 PM