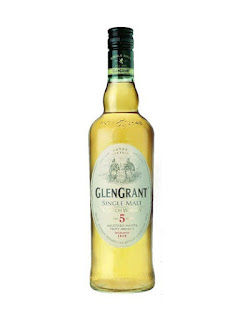 We picked up this young expression of Glen Grant single malt when on a trip to Italy.  We had to buy it as we had never seen it before and it seemed a very good, budget price.  It turns out that this particular expression is only available in selected southern European markets, with Italy as the main market, plus South Africa.  It struck us as different to have such a young age statement displayed, especially with the current trend for 'no age statement' bottlings.  This 5 years old single malt is bottled at 40% ABV and is widely available through Italy.  A bottle should cost around €20-25.


Glen Grant is located in the small town of Rothes in the centre of the Speyside region of Scotland. The distillery was founded by James and John Grant in 1840, and the brothers decided to use their surname for the distillery name.  Glen Grant remained in their direct ownership until 1872 when James died (John had died in 1864).  The distillery was inherited by James’ son, James Grant Jnr.

Glen Grant remained under family ownership until Grant Jnr’s grandson, Major Douglas Mackessack, sold it to the Canadian group Seagrams in 1972.  Following numerous subsequent takeovers, Gruppo Campari took control in 2006.  They purchased the distillery and brand as it was so popular in the Italian market and re-launched the single malt range in 2007.

Our tasting notes
The colour is pale gold and the nose has an immediate fresh and vibrant quality.  There are delicate aromas of green apple and honey with further aromas of vanilla, malted cereals and dried grass coming through.  Hints of lemon zest and fresh coconut round things off.  Basic but enjoyable.

On the palate this whisky is initially fresh and vibrant as on the nose but with sharp, zesty lemon and vanilla notes being the first to appear in this case.  Then come some lovely honey and malted barley characteristics and these combine well with further fresh green fruit notes - think of crisp apples, unripe pears and white grapes.  There are background hints of dried apricot, icing sugar, cinnamon and white chocolate.  The addition of water knocks back the vibrancy and makes it very creamy, soft and full of vanilla and malt.

The finish is short but pleasant.  This is especially true once the sweet vanilla and honey disappear, along with the fresh green fruits.  This leaves the drier, spicier and bittersweet notes to fight each other - the malty cereals, the dried grass and bitter lemon zest especially.

What's the verdict?
This Glen Grant 5 years old is a lovely whisky and shows how good a younger whisky can be.  It is not the most complex single malt ever but it is not designed to be and represents great value for money.  It is a light, delicate and refreshing whisky that is perfect for drinking in a warmer climate like Italy.  We can see it also mixing well in a long drink or cocktail, which is what we plan to try next.  Know anyone in Italy, or travelling to Italy?  Tell them to get you a bottle.

In Italy you can find it in any bar, even the ugliest.
You can also find it at EUR 15 (on line).

Is a simple whisky, not bad, simple and neat but in Italy does not have a huge prestige.

I use it for risotto with saffron and sausage. Really! :D

Costs 8 euros in my local esselunga! At that price it's amazing!

Just back from Lido di Jesolo, bought a bottle in the local supermarket for 14.95 Euros, amazing

The best single malt for your buck. Far better than other cheap single malts like Bowmore or Glenfiddich. Unpolished but pretty darn good.

eToro is the most recommended forex trading platform for beginning and advanced traders.