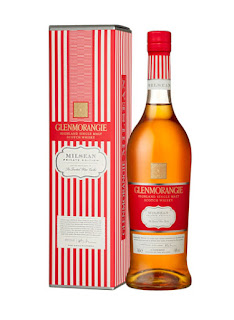 This whisky is the latest to be released in to the annual Private Edition series from Glenmorangie.  The series is designed to showcase the continued creativity and innovation that has long been a hallmark of the north Highland distillery.  The Milsean (pronounced meel-shawn and meaning 'sweet things' in Gaelic) is the seventh such release in the Private Edition series and takes it in yet another different direction.  This new expression has been part matured for almost three years in ex-Portuguese red wine casks, which were heavily toasted before filling.  This has the effect of re-caramelising the natural sugars in the wood.

"Extra-maturing Glenmorangie in heavily toasted red wine casks has allowed us to create a whisky recalling a bygone era. A glass of Milsean transports me straight to an old-fashioned sweet shop".
Dr. Bill Lumsden - Director of Distilling & Whisky Creation, Glenmorangie.


The Glenmorangie Milsean is bottled at 46% ABV and is non chill-filtered and of natural colour.  There are 60,000 bottles available and these will be distributed across a selection of key markets for Glenmorangie including France, Germany, Japan, the Nordics, Taiwan, the UK and the USA.  The price will be £75.99 per bottle and it will be available through whisky specialist retailers.

On the palate the whisky feels light but weight is added by the sweet sugary nature of the initial flavour profile.  There is plenty of sweetness to begin with - think of fudge, toffee and golden syrup - before some warming wood spices try to balance things out (imagine cinnamon and nutmeg especially, with a pinch of white pepper).  These are joined by an increasingly intense mix of fruity notes including fresh cherry, dried cranberry, dried mango and candied orange and lemon.  Further depth and complexity is added by developing background notes of lemon sherbet sweets, dessicated coconut and a hint of green tea.

The finish is short and sweet.  The red fruits and fudge/toffee notes are most prominent but fade quickly to leave some tannic elements and the wood spices remaining.  There are late hints of bitter apple, sawdust and sweet tobacco.  Then it is gone.

What's the verdict?
This is lovely new whisky from Glenmorangie and a nice addition to the Private Edition series, which we have always enjoyed in the past.  We love the air of experimentation that surrounds the series and the interesting flavour profiles that this continues to create.  This has also translated to the packaging in the Milsean with its bold red and white candy cane stripes.

This whisky exhibits a lot of sugary sweetness, especially early on the palate and continuously on the nose.  The palate comes across drier than the very sweet nose suggests and also has a fuller mouth feel than expected, which seems almost oily at times.  However, the finish is very short and this seems a bit of a shame.