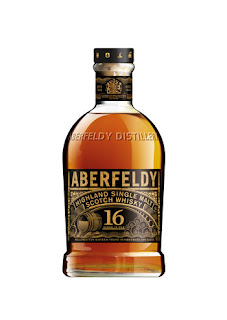 John Dewar & Sons, the owners of the Highland distillery of Aberfeldy, have released a new expression in to their core single malt range. The Aberfeldy 16 years old has been matured entirely in ex-Oloroso sherry casks and will sit between the current 12 and 21 years old expressions in the range, which forms part of the owners wider Last Great Malts portfolio. There is also an 18 years old, which is exclusive to the travel retail sector. This new release was launched back in November and will be available in eleven selected world markets - Belgium, Canada, Germany, France, Japan, Lebanon, Netherlands, Russia, Sweden, Taiwan and the UK.

Aberfeldy is located in the hamlet of the same name in the southern Highlands. It is currently owned by John Dewar & Sons, which is a subsidiary of the larger global Bacardi group. The distillery is engrained in the history of the Dewar's blended Scotch brand, as it was founded and built by John and Tommy Dewar in 1896 with the objective to make single malt for their popular White Label. The White Label remains one of the world's best known brands and is firmly in the world Top 10 for blended whisky sales.  It has a particular stronghold in the USA. The distillery has a current annual production capacity of 3.5 million.

Aberfeldy is also home to the Dewar's World of Whisky. The distillery's relative proximity to Edinburgh makes Aberfeldy one of the most popular distilleries in Scotland with thousands visiting each year. We can highly recommend it.  This new 16 years old expression is bottled at 40% ABV and has a recommended retail price of £62.

Our tasting notes
The colour is golden yellow and the nose has an initial combination of green apple and butterscotch aromas.  These are supported by increasing notes of crumbly brown sugar, sultanas, honey and cinnamon.  There are further hints of orange oil, nutmeg, liquorice and earthy ginger root, plus a whiff of hazelnut.

On the palate the whisky feels gentle and soft, but quite rich and mouth coating.  The notes of green apple and orange from the nose dominate to begin with.  The orange is more prominent and has a more candied peel quality to it and the green apple seems more reminiscent of stewed apple.  With time a lovely butterscotch note develops to compliment the fruit and this characteristic is backed up by further sweetness in the form of honey, juicy sultanas and milk chocolate.  The sweetness is tempered by additional elements of hazelnut, cinnamon and crystalised ginger.

The finish is of medium length with the candied orange peel and butterscotch notes to the fore.  As these fade the earthy ginger and wood spices start to come through - this gives the finish a warming and slightly drying quality, which is accentuated by a distinct nuttiness.

What's the verdict?
This is a pleasant and easy drinking whisky from Aberfeldy.  To us it seems to bridge the gap between the current 12 and 18 year olds in the range, which it is clearly intended to do.  It has elements of both whiskies - the sweet butterscotch of the 12 years old and the fruity/nutty qualities of the 18 years old - but without being markedly different from either.  This could possibly be to its detriment as there are many other whiskies with similar characteristics and price tag, so it may struggle to stand out to potential consumers for this reason.  Only time will tell.