These whiskies are a trio of new limited edition single malts from the Highland distillery of Tomatin.  They are designed to demonstrate the distillery's experimentations with different types of casks - the 9 years old Caribbean Rum, the 14 years old Cabernet Sauvignon and the 21 years old Oloroso Sherry. All are bottled at 46% ABV and will be available in selected specialist whisky retailers worldwide.

The Tomatin distillery is located in the Highlands of Scotland, about half way between Aviemore and Inverness. It was founded in 1897 by a group of Inverness businessmen and was called Tomatin Spey. It only became Tomatin, the name of the local village, in 1907. Tomatin is currently owned by the Takara Shuzo Corporation, who purchased the distillery in 1986 after the previous ownership had been liquidated.

Tomatin is a large distillery with a current annual capacity of five million litres. Historically most of this has been produced for the blending market but in recent years Takara Shuzo have invested heavily in introducing and expanding a single malt range. This includes a number of Tomatin expressions plus the Cù Bòcan, a peaty version of Tomatin that is produced for just one week every year.

"We are constantly striving to experiment and push boundaries with our Tomatin single malt to produce unique creations that appeal to our existing customers and a wider audience.These new limited editions do that."
Stephen Bremner - Marketing Manager at Tomatin. 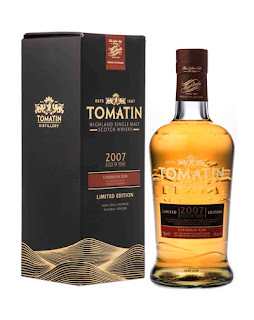 Tomatin 9 years old Caribbean Rum
The 9 years old is the first ever rum cask matured whisky released by Tomatin and there are just 6,600 bottles available. The whisky used was all distilled in 2007. They will cost £39.99 each.

The colour is pale yellow and the nose is fresh, vibrant and sweet.  There is an instant icing sugar aroma and then further notes of honey, vanilla and soft brown sugar.  This is followed by some hints of tropical fruit (think of mango and pineapple), white chocolate and dried grass.

On the palate this whisky feels light, sweet and tangy.  There are initial notes of honey, icing sugar and lemon zest.  These combine with notes of bittersweet malted cereal, dried grass and vanilla.  Underneath are background notes of vanilla, cocoa powder and the tropical fruits from the nose.  This fruity characteristic has more of a dried quality though now, but remains reminiscent of mango and pineapple in particular.  A late hint of cinnamon and ginger rounds things off.  The finish is quite short and sharp, especially once the sweet and fruity elements fade. 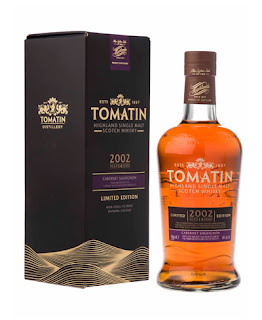 The colour is deep gold with a distinct reddish tint.  The nose is a mix of caramel and dried fruit aromas (imagine raisins, sultanas and cranberries).  Other aromas include earthy wood spices (ginger and cinnamon especially), malted barley and a hint of dark chocolate.

On the palate this whisky feels rich, sweet and spicy.  The initial notes are again of the distinctive dried fruits (raisins, sultanas and cranberries but with a hint of candied orange peel and red cherry) and caramel.  Underneath are further notes of robust malted barley, honey and warming wood spices - this is most reminiscent of ginger, cinnamon, all-spice and a hint of clove.  A brief background note of rose petal and orange oil round the palate well.  The finish is of decent length and particularly warming and drying, almost slightly tannic, especially once the sweet fruity elements dissipate. 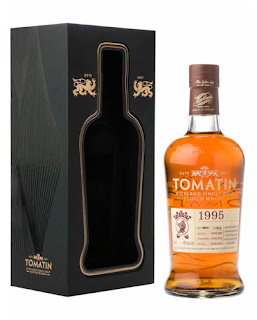 Tomatin 21 years old Oloroso Sherry
The 21 years old has been matured in ex-Oloroso sherry casks and was distilled in 1995. It is the rarest of the trilogy with just 1,908 bottles to be available. They will retail at £99.99 each.

The colour is a vibrant gold and the nose is fragrant and very promising.  There are dominant aromas of honeycomb, raisins and almonds, with further aromas of cinnamon and caramel developing.  A late whiff of golden syrup and milk chocolate give additional complexity. Very classy.

On the palate this whisky is soft and velvety with delicious initial sweetness.  This is led by notes of caramel, golden syrup, honeycomb and mixed dark dried fruits (raisins, sultanas and candied orange).  Underneath are tropical fruit hints of (pineapple and mango especially), almonds and walnuts, along with some warming and earthy cinnamon-like baking spices and a very late note of cocoa.  The finish is long and particularly sweet to begin with.  The caramel and dried fruit characteristics slowly fade before leaving the drying nutty and baking spice notes to linger and grip the taste buds.

The 21 Year Old Sherry Cask Finish sounds divine. I only started getting into sherry influence whisky this year and now I can't get enough.

Need To Increase Your ClickBank Banner Traffic And Commissions?