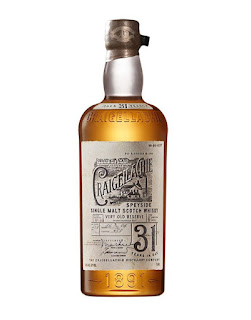 This is the oldest and rarest of the single malts in the core range of the Craigellachie distillery in Speyside. The Craigellachie 31 years old was released in 2016 and has recently won the prestigious title of Best Single Malt at the World Whisky Awards 2017. Craigellachie's whiskies are part of a wider programme of single malt releases that were launched three years ago by owners John Dewar & Sons, part of the Bacardi group. This programme aims to showcase the Scottish distilleries owned by the group - Aberfeldy, Aultmore, Macduff and Royal Brackla, plus Craigellachie.

Craigellachie was founded in 1891 by Alexander Edward and Peter Mackie, and was designed by renowned Victorian distillery architect Charles Doig. It is located in the Speyside village of the same name and translates as 'rocky hill' from Gaelic. The distillery sits on that rocky hill and looks over the village.

Craigellachie is a large distillery and has an annual production capacity of around five million litres. It is one of the few distilleries remaining to use wormtub condensers and this gives the spirit a characteristic heavier edge. Most of the whisky produced is used in the Dewar's range of blends, although occasional releases do turn up through independent bottlers.

"Since launching, Craigellachie has built up a huge reputation with whisky connoisseurs – its sought out and admired – and the World's Best Single Malt accolade is true testimony to this. It shows how far the Craigellachie brand has come in the last three years."
Georgie Bell - Global Malts Ambassador for John Dewars & Sons.


The Craigellachie 31 years old is bottled at 52.2% ABV, is non chill-filtered and of natural colour. The whisky is only available in limited quantities and from selected suppliers worldwide. The recommended retail cost is £500/ $800 US per 70cl bottle.

Our tasting notes
The colour is a deep golden yellow and the nose is packed with a complex set of aromas - think of stewed apples, golden syrup, vanilla, pears poached in white wine, vanilla and delicate wood spices such as cinnamon. A background hint of white chocolate and dried tropical fruits add further depth.

On the palate the whisky has a soft and velvety feel, despite the high ABV. It feels viscous and luxurious. Initially there are notes of golden syrup mingling with stewed green apples and pears. This is backed up by further fruitiness in the form of dried tropical fruit, which seems more prominent than experienced on the nose. There are elements of mango, pineapple, over ripe banana and . There is also a distinct savoury element - a hint of sulphur, delicate wood spices (that cinnamon again, plus some dry oak), something reminiscent of menthol or eucalyptus and a distant soft earthy whiff of peat smoke.

The addition of water tones down the earthy and spicy notes. The whisky becomes softer and develops a toffee/fudge edge to it.  The finish is long with the warming and drying spices lingering most. The sweet and fruity elements slowly fade. The combination is simply delicious.

What's the verdict?
The Craigellachie 31 years old is a sublime and classy whisky that combines so many delicious elements, The nose and palate are superb. It is well balanced and demonstrates just how good older whiskies can be with sympathetic casking during maturation.

Is it the best single malt in the world? It is difficult to say for us as we have tasted many great ones and competitions are always judged by people with differing tastes. That said, it is very good and very enjoyable to drink. It is good to see a formerly under rated distillery gaining some prominence.