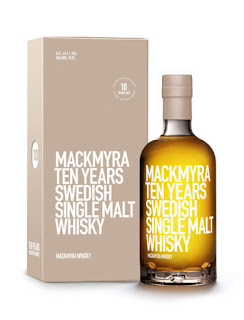 This whisky is the first major release from the Swedish distillery of Mackmyra that carries an age statement. The Mackmyra 10 years old has been matured in a combination of ex-bourbon casks and new American oak casks that have previously held sherry. These have been stored 50 metres under ground in Mackmyra's unique Bodås warehouse at the distillery, which is the site of an old mine. There are just 20,000 bottles available of this release. Half are going to the Swedish market, with the remainder going to selected world markets including Belgium, France, Germany and the UK. It is bottled at 46.1% ABV and will cost £65 each.

Mackmyra was founded in 1999 by a group of friends who decided to build Sweden's first single malt distillery whilst on a skiing trip. The distillery was originally small and was replaced in 2012 by a new eco-friendly distillery in the town of Gävle. This state-of-the-art distillery is 37 metres high, cost an estimated £50 million to build and uses gravity during production - simplistically, malted barley is fed in the top and new make spirit comes out of the bottom. The annual production capacity is approximately 525,000 litres.

Our tasting notes
The colour is golden yellow and the nose has a lovely set of fresh aromas that combine superbly. There are fresh green apples and pears along with honey, vanilla and hints of ripe peach and white chocolate. These are supported by woody baking spices such as cinnamon and all-spice with a hint of gingerbread and liquorice.

On the palate the lightness and freshness continues. Again there is plenty of green fruit, especially the apple and pears from the nose, plus a hint of honeydew melon. Other significant notes present are vanilla, white chocolate, honey and golden syrup. Underneath are a set of warming wood spices. This gives an earthiness and dryness to combat the fruity and sweeter elements. This is most reminiscent of cinnamon, nutmeg, wood shavings, oak, ground ginger and a pinch of star anise and white pepper. Further late sweetness comes in the form of icing sugar.

The finish becomes increasingly woody and dry, which extends the length beyond that expected for such a fresh whisky. The sweet and green fruit notes fade to let the oak and baking spices dominate.

What's the verdict?
We have always liked the light and delicate nature of Mackmyra but sometimes it can get a bit lost in some of their experimental cask finishes. It is pleasing to see that they have stayed traditional with this inaugural 10 years old release and it reinforces that it is what they do best in our opinion.

The American oak influence adds a lovely balance of sweet against spice, which in turn works well with the fresh green and fruity nature of their spirit. A very nice whisky indeed and one well worth searching out.