Within Inbox we aim to write a few lines detailing each press release/piece of news/PR event that we have received and provide links, where possible, for you to find out further information.  This is the news that has grabbed our attention this week. Warning - there is a lot ... 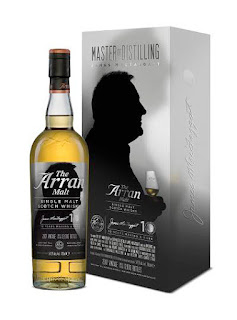 Arran
The Isle of Arran distillery has celebrated the 10th anniversary of Master Distiller James MacTaggart being at the distillery with the release of a limited edition whisky. The Arran James MacTaggart Edition is constructed using casks selected by MacTaggart himself. These were all matured in first fill ex-bourbon barrels and were filled in his first couple of months of his decade-long service.

The whisky is non chill-filtered, of natural colour, bottled at the natural cask strength of 54.2% ABV and presented in a specially commissioned box featuring a silhouette of James MacTaggart. There are just 12,000 bottles and these will be available via the distillery shop on Arran, www.arranwhisky.com and selected specialist whisky retailers worldwide. Each bottle will cost £65. The popular Speyside distillery of Balvenie have announced the first permanent addition to their core single malt range for almost five years with the release of the Balvenie Peat Week 14 years old. The new peated expression is the result of trials undertaken by Balvenie's Malt Master David Stewart MBE and Ian Millar, the former Distillery Manager at Balvenie, at the turn of the century. At the time not many Speyside distilleries were producing peated malt whisky and ever since Balvenie have dedicated one week per year to produce some.

The first batch of the Balvenie Peat Week 14 years old has used whisky distilled during that week in 2002 and has been matured exclusively in American oak casks. It is non chill-filtered at bottled at a strength of 48.3% ABV. It will be available in selected specialist whisky retailers shortly, initially only in certain markets - Denmark, Sweden, the UK and the USA. The recommended price is £60 per bottle. 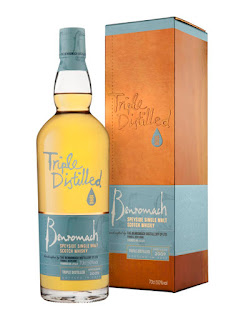 Benromach
The small Speyside distillery of Benromach have announced an innovative new whisky - the Benromach Triple Distilled. Most whisky in Scotland is normally distilled just twice and this is the first triple distilled spirit released by Benromach. The whisky used for this first batch was distilled in 2009 and matured in first fill ex-bourbon barrels. It is released at 50% ABV and there will be just 7,800 bottles. They will be available via selected specialist retailers in Europe and the UK with a recommended price of £45 each.

“This new whisky is distilled in a wash still once and twice in a spirit still resulting in a light, fruity character with a fantastic delicate smokiness. We handcraft all our whiskies, giving us flexibility to experiment with different distilling and maturation techniques and our new Triple Distilled is testament to this.”
Keith Cruikshank - Distillery Manager at Benromach. 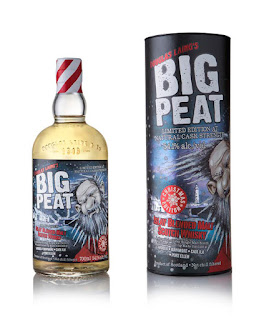 Douglas Laing & Co.
Independent bottler Douglas Laing & Co have announced details of the annual Christmas bottling of cult Big Peat blended malt. The whisky is a blend of Islay single malts including Ardbeg, Bowmore, Caol Ila and the legendary Port Ellen. The Big Peat Christmas Edition 2017 has been bottled at the natural cask strength of 54.1% ABV, is non chill-filtered and of natural colour. It will be available from selected specialist whisky retailers and via www.douglaslaing.com from mid-September. No indication of price was included in the press release. 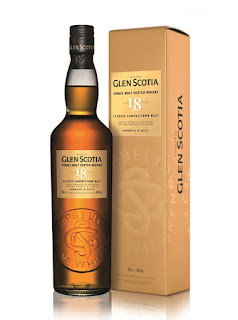 Glen Scotia
The Glen Scotia distillery, one of only three left in the Victorian whisky capital of Campbeltown, have announced the release of a new single malt in to their core range. The Glen Scotia 18 years old has been matured predominantly in ex-bourbon casks for its first 17 years, before being transferred to ex-Oloroso sherry casks for the final year of maturation. It has been bottled at 46% ABV, is of natural colour and non chill-filtered. The new whisky will be available in specialist whisky retailers in selected markets including Belgium, Germany, Poland, Taiwan and the UK. The recommended price is £80 per bottle. 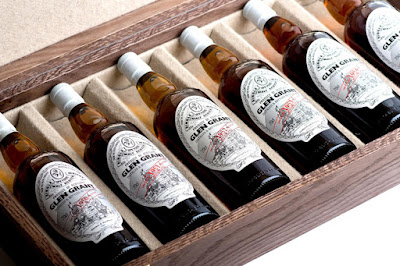 The selection has a total of 353 years of maturation and is presented in a wooden display casket. There will be just 75 of the Glen Grant Collection available and these will retail via selected specialist whisky retailers in the UK for £9,995 each. Limited numbers will also be available in a small amount of other world markets.

“By creating this collection, we have captured a unique piece of Scotland’s liquid history, bringing together a combined 353 years of knowledge, expertise, and whisky maturation. With six whiskies aged between 57 and 61 years old, this collection is a testament to the company’s ability to nurture aged expressions.”
Stephen Rankin - Director at Gordon & MacPhail.


posted by Whisky For Everyone at 2:21 PM