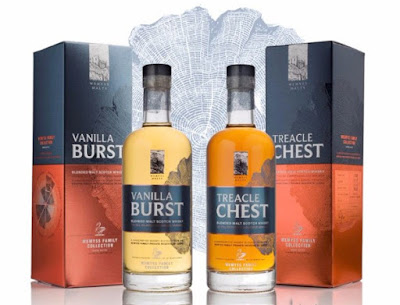 The Wemyss family have released these two new whiskies as the first in a new series called The Family Collection. The collection has been crafted from whiskies held within the Wemyss family's own private portfolio of casks. These first two releases - entitled Treacle Chest and Vanilla Burst - represent two differing styles of whisky, one has been matured in ex-Sherry casks and the other in ex-bourbon casks. The names refer to the expected flavour characteristics from each cask type.

Treacle Chest is a blended malt containing just two Highland single malts and this first batch has been made using 14 first-fill ex-sherry hogsheads. There are to be 6,300 bottles. It will cost around £47 per bottle. In contrast, Vanilla Burst is a blended malt of just two Speyside single malts and has been made using 15 first-fill ex-bourbon barrels. There will be just 4,800 bottles. It will cost around £44 a bottle.

Wemyss Malts is part of a Scottish based spirits company owned by the Wemyss family. They also own the Darnley's View gin, Lord Elcho blended whisky and Provence-based Rimauresq wine brands. The Wemyss family (pronounced weems) is based at Wemyss Castle, overlooking the Firth of Forth estuary in Fife. The castle has been the family home since 1421 when it was constructed by Sir John Wemyss. The family have traditional ties to the whisky industry and barley grown on their estate is still used by leading distillery companies.

Both new whiskies are bottled at 46% ABV and are of natural colour and non chill-filtered. They are both available in limited quantities through specialist whisky retailers in selected markets. 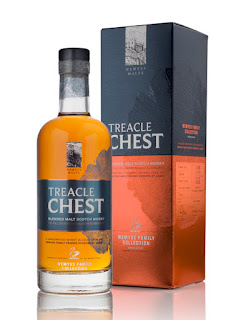 Treacle Chest
The colour is a deep orangey amber and the nose is rich and sweet but with a background earthy and spicy aroma. Obviously sweet aromas come through such as golden syrup and dried fruits, especially raisins and sultanas. There is also an underlying malty cereal aroma, along with candied orange and milk chocolate. A whiff of delicate peat smoke can also be detected.

On the palate this whisky has a heavy, almost mouthcoating feel. The golden syrup and dried fruit notes from the nose are particularly prominent and this is joined by increasing notes of molasses and black treacle. This threatens to dominate but is tempered by some malty cereal characteristics, which add a bittersweet element. Underneath are further notes of ginger, white pepper, liquorice and prunes. These are joined by a pinch of cinnamon and milk chocolate plus hints of cedarwood and eucalyptus. A delicate earthiness carries on in to the finish to give further warmth and depth. The finish is generally short and gets quite hot at the very end. 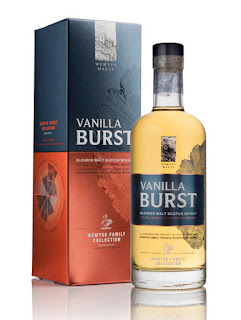 Vanilla Burst
The colour is golden yellow and the nose is fresh, light and sweet. There are initial aromas of green apple, peardrop sweets and heather honey before further aromas of toffee and white chocolate also develop. Unsurprisingly, given the name, there is also some vanilla present and a hint of woody baking spices - think of cinnamon, all-spice and gingerbread.

On the palate there is much more of the vanilla note immediately present. This mingles with the honey and white chocolate characteristics from the nose, along with a pleasing note of custard powder. Then comes the apple, although this has more of a poached or stewed feel now. Further sweetness is added by hints of butterscotch and icing sugar, all of which are balanced by some warming wood spices - think of cinnamon especially, plus a pinch of powdered ginger. The finish seems slightly short, particularly once the sweeter notes have faded. The warming spices linger but are soon gone too.

What's the verdict?
The Treacle Chest and Vanilla Burst are two decent whiskies and ones that demonstrate exactly what they set out to - the main flavour differences between the ex-sherry and ex-bourbon casks. Both are easy drinking and we particularly enjoyed the Vanilla Burst with its sweet and creamy characteristics.

The blended malt category is one that seems very hot at the moment and we are seeing plenty of new products appearing on the market. It will be interesting to see what Wemyss Malts do next with The Family Collection to try and stand out from the crowd.