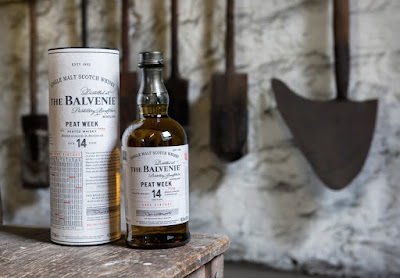 This new whisky is the first permanent addition to their core single malt range of Balvenie for almost five years. The Balvenie Peat Week 14 years old is a peated expression and is the result of trials undertaken at the turn of the century by David Stewart MBE, Balvenie's legendary Malt Master, and Ian Millar, the former Distillery Manager at Balvenie. At that time, not many Speyside distilleries were producing peated malt whisky and ever since Balvenie have dedicated one week per year to it.

The Balvenie distillery is located in the town of Dufftown in the Speyside region of Scotland. It was founded in 1892 by William Grant and was built next to its sister distillery of Glenfiddich. Balvenie remains owned by the Grant family and has an annual production capacity of 5.6 million litres. It is one of the most traditional distilleries in Scotland as all stages of the whisky making process happen on site - growing barley, malting, mashing, fermentation, distillation, coopering and maturation. Balvenie is one of the best selling single malts in the world and sits comfortably within the Top 10 for sales volume.

The first batch of the Balvenie Peat Week 14 years old has used whisky distilled during the peated spirit production week in 2002 and has been matured exclusively in American oak casks. It is non chill-filtered at bottled at a strength of 48.3% ABV. It is available through selected specialist whisky retailers, although initially only in certain markets - Denmark, Sweden, the UK and the USA. The recommended price is £60 per bottle.

Our tasting notes
The colour is golden yellow and the nose vibrant, fresh and sweet. There are plenty of peat smoke aromas up front and these create an instant soft earthiness. Combating this are distinct aromas of honeycomb, cookie dough and vanilla, plus some malty cereals and a lovely whiff of dried apple and candied lemon.

On the palate it is the sweeter elements from the nose that hit first. The whisky feels viscous and luxurious, almost syrupy. There are plenty of honeycomb, heather honey and vanilla notes present, along with a hint of crumbly brown sugar. Underneath are more subtle notes of green apple, stewed pear and a hint of apricot jam. Warming wood spices are everywhere also - think of cinnamon, all-spice, mace and hints of clove and liquorice root. All of this is underpinned by a decent level of soft peat smoke that is never far away. It seems to perforate through everything and has an earthy, slightly dusty/ashy feel to it.

The finish is long and the smoke really comes to the fore. The sweetness and notes of green fruit fade to give a much drier mouthfeel that expected. The smoke turns more ashy and the warming wood spices grip and take hold.

What's the verdict?
We were intrigued to taste the Balvenie Peat Week once we heard it was coming out. It was difficult to know what to expect but it does not disappoint. The whisky is tasty, balanced and easy drinking, even at the slightly high strength. It would be a good introduction to the world of peated whiskies for someone too.

Although the peat PPM level is not  stated on the press release, our guess is that may be quite high. The smoke seems quite punchy but it still has some way to go to go fighting with the big heavy Islay malts. An interesting experiment and it will be intriguing to see how it goes with consumers and on the shelves of retailers.

The PPM is stated as 30 on the Balvenie site: https://www.thebalvenie.com/our-whisky-range/view/the-balvenie-peat-week-2002-vintage around 5-6ppm.

Thanks for the review! Balvenie was starting to become famous now. It is worth to try!

Cool review man, thanks for sharing your opinion. I've been looking for posts about this whiskey for a couple of days now, and your insight was helpful.