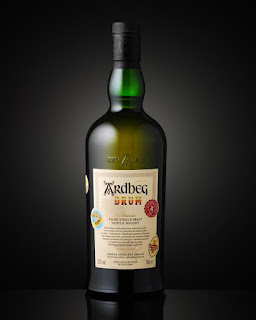 This whisky is the annual Committee Release from the renowned Islay distillery of Ardbeg. The special bottling, named Ardbeg Drum for 2019, is only available to Ardbeg Committee members. A lower ABV version will be available in domestic retailers closer to Ardbeg Day, which is on June 1 this year. Ardbeg Drum is a limited edition single malt that started its maturation in American oak ex-bourbon casks before being transferred to ex-rum casks from the Caribbean for a period of finishing. This is the first ever expression of Ardbeg to feature ex-rum casks.

The Ardbeg distillery is located on the southern coast of Islay and was founded in 1815 by John MacDougall, although records show a distillery operating on the site as far back as 1794. The recent history shows no production for large parts of the mid-1980s and 1990s, plus the majority of 1996 and 1997. Moet Hennessy took over at that point and renovated and revitalised Ardbeg's fortunes. The distillery has an annual production of just over one million litres per year, although expansion plans are in place, and boasts an award-winning visitor centre and cafe.

The Drum Committee Release is bottled at 52% ABV and is non chill-filtered. It was on sale for £94 per bottle, although the exact number of bottles were not revealed. Sadly it has already all gone within the first day on sale. For all information about Ardbeg or to join the Committee, which is free of charge, please visit www.ardbeg.com.

Our tasting notes
The colour is golden yellow and the nose has an immediate hit of acrid medicinal smoke. This has a dirty and wet earthy, almost mossy, edge to it. This evolves in to green vegetal aromas that is most reminiscent of dried grass/hay. Sweetness finally battles through in the form of hard toffee brittle and icing sugar with hints of cocoa and foam banana sweets. Soft delicate floral aromas also come, possibly heather and lavender.

The palate begins with a bang. Lots of feisty and acrid peat smoke notes are evident, which become greener and more earthy with time. Dried grass, wet moss and fresh bitumen characteristics can be detected. The combination almost takes the breath away. Then come some fresher and sweeter notes - think of green apple, malted barley, golden syrup and hints of marshmallow and Royal icing. Warming spices evolve (especially cinnamon, gingerbread, nutmeg and a pinch of clove powder) and add depth. A creamier and softer feel comes through towards the end and reveals notes of vanilla and cream soda, plua a hint of cocoa and liquorice.

The finish is extremely long with intense peppery smoke lingers for ages. This has elements of green chilli and warming spices, especially cinnamon. Dried apple and malty barley also linger but the whisky becomes very dry, smoky and acrid with time.

What's the verdict?
The Ardbeg Drum certainly packs a massive punch and is a big, bold and uncompromising single malt. Certainly not one for the faint hearted, but then the Ardbeg Committee is not generally filled with people like that. They love the heavily peated whiskies that the distillery produces and this does not disappoint.

Drum does become creamier and softer when water is added. More maltiness, vanilla notes and sweetness come through, while the hefty peat smoke and feisty spices are toned down. If you like the sound of Ardbeg Drum, then you will now have to wait until the less limited domestic retail version comes out in a couple of months or cough up a decent fee on an auction site.