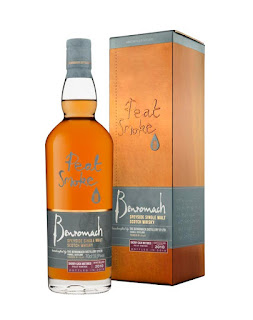 This limited edition whisky is from the small Speyside distillery of Benromach and uses some of their rare heavily peated spirit. The Benromach Peat Smoke Sherry Matured uses spirit that was made using heavily peated barley, which they only produce for a short period each year, and then filled to first-fill ex-sherry hogshead casks. The spirit used was distilled and filled to cask in 2018 and bottled in late 2018. Just 6,500 bottles will be available in specialist whisky retailers in selected markets worldwide. It has been bottled at the natural cask strength of 59.9% ABV and is of natural colour and non chill-filtered. A bottle will cost £65/€75.

Benromach was founded in 1898 and built next to the Aberdeen-Inverness railway line in Forres. It remains one of the smallest operating in the Speyside region and was one of the last designed by the renowned Victorian distillery architect Charles Doig. It was built as Forres Distillery and became Benromach in 1919, taking the name from the nearby Romach Hills. Benromach is currently owned by Gordon & MacPhail and they renovated it after a period of closure, re-opening in 1998. The current annual production is 500,000 litres, although this will increase with a planned expansion.

"This is the first time that Benromach has released a sherried Peat Smoke expression and we’re very proud of it. This perfectly balances the smokiness with the sweeter sherry notes, giving rise to a spectacularly rich and intense dram."
Keith Cruickshank - Distillery Manager at Benromach.


Our tasting notes
The colour is deep amber and the nose has a delicious initial sweetness to it – this combines aromas such as caramel, dried fruits (especially raisins, cranberry and candied orange) and milk chocolate with sweet, gentle peat smoke. There is a further earthiness and a pinch of wood spice, which is most reminiscent of cinnamon, and a hint of marshmallow.

On the palate this whisky is immediately more smoky and hot than on the nose. The peat smoke has a pleasant sweetness to it (think of damp earth, moss and dried tobacco leaves) and this is not like the medicinal, acrid peat often associated with an Islay whisky. This smoke mingles with creamy notes of toffee, milk chocolate and caramel, plus richer notes of dark dried fruits (raisin and cranberry again, plus sultana and currants). There is a distinct underlying maltiness along with some dusty cocoa powder and a suggestion of toasted almonds. This is all complimented by hints of star anise, cinnamon and candied bitter orange peel.

The finish is again smoky and sweet, although it is the peat that lingers longest. The sweeter elements fade to leave a mouthwatering and pleasant dryness that becomes a little more ash-like than previous experienced on the nose and palate.

What's the verdict?
This is a bigger and bolder whisky than you would expect from Benromach. The heavily peated malt give it power and much less subtlety than their regular expressions. That said, this is no peat monster or Islay wannabe. The smoke has a delicious sweetness and softness with none of the Islay acrid medicinal notes. It is reminiscent of BenRiach, another peated Speysider. The ex-sherry cask influence also helps to soften the smoke and add further depth and structure. A very nice whisky and well worth seeking out.