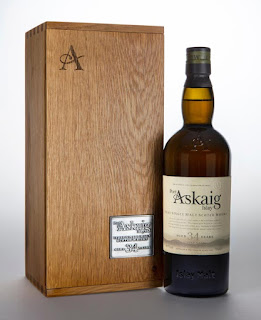 This whisky is a new single cask single malt released by Elixir Distillers under their popular and award-winning Port Askaig name. The cask in question is an American oak ex-bourbon hogshead. While the distillery remains un-named, clues to its origin are given in the press release - the whisky was produced at Islay's largest distillery, which is situated just to the north of the village of Port Askaig. It was also distilled and filled to the single cask in 1983, and has been bottled at 34 years of age.

Port Askaig is a small hamlet on the east coast of the famous whisky island of Islay in the Hebrides, best know these days as on of the island's two ferry ports. There is no distillery at Port Askaig but the name encompasses Islay, its heritage and its people by allowing Elixir Distillers to select and bottle whiskies from all over the island in small batches. For more details on the brand, please visit www.portaskaig.com.

The Port Askaig 34 years old is bottled at the natural cask strength of 49.7% ABV and is non chill-filtered and of natural colour. The single cask has yielded just 180 bottles and each will cost £575. It will be available via The Whisky Exchange stores and website.

Our tasting notes
The colour is golden yellow and the nose is surprisingly fresh considering the age of this whisky. There is an initial deep malty and biscuity aroma, which mingles with an ashy and bonfire-like smokiness. Underneath is an interesting mix of aromas - honeycomb, lemon juice and cream soda along with a hint of something herbal.

On the palate this whisky has a viscous, almost waxy, feel. Sweetness kicks everything off with a delicious combination of manuka honey, boiled sweets and butterscotch notes to the fore. Then comes the earthy and ashy smoke, along with some warming baking spices (think of all-spice with a pinch of cinnamon). The smoke turns more medicinal with time and is reminiscent of a herbal cough lozenge at this point. Bittersweet elements such as malt and candied lemon peel add further depth, as do soem savoury notes - imagine cigar tobacco leaf and a hint of leather here.

The finish is robust and very herbal upfront with a mix of vegetal and medicinal peat alongside hints of sage and eucalyptus. Bittersweet malt and sweet honey and butterscotch are also present. Once they begin to fade, it is the smoke that lingers. This has extraordinary length and has a warming, earthy and ashy feel.

What's the verdict?
The Port Askaig 34 years old is an extremely refined and classy single malt. It is also one that defies its age with a wonderful vibrancy and freshness not often found in whiskies of 30+ years old. It is a comforting and sociable whisky that combines warming and lingering ashy smoke with sweeter and savoury characteristics. The combination is sublime and creates superb depth and complexity.