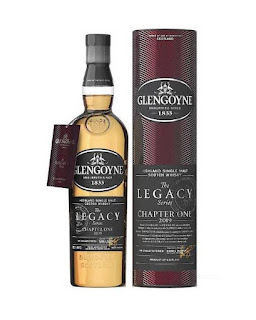 This whisky kicks off a new series from Glengoyne. The Legacy Series is launched to show key points in the distillery's history and some of the influential people and stories that have shaped its heritage. A new bottling will be released annually going forwards. Chapter One honour Cochrane Cartwright, a former Distillery Manager who arrived in 1869. During his tenure he introduced the slower distillation time that Glengoyne still follows today. He also introduced the use of ex-sherry barrels during maturation and Chapter One reflects this - it has been matured in first-fill ex-Oloroso sherry casks.

Glengoyne was founded in 1833 by the Edmonstone family and was originally named as Burnfoot, not changing to Glengoyne until 1905. The distillery sits in a unique position straddling the A81 road. This road divides the Highlands from the Lowlands in Scotland, so at Glengoyne the whisky is produced in the distillery on the Highland side and matured in the warehouses on the Lowland side. It sits in the hamlet of Dumgoyne, just 14 miles north of Glasgow, and receives over 75,000 visitors annually. Glengoyne is currently owned by Ian Macleod Distillers and produces just under one million litres per year.

The Glengoyne Legacy : Chapter One is bottled at a strength of 48% ABV and is non chill-filtered and of natural colour. The recommended retail price is £55. It was initially available only at the distillery shop but will see a full global distribution over the coming months.

Our tasting notes
The colour is golden yellow with a tint of amber and the nose is sweet with an underlying set of malty and savoury aromas. Sweet toffee and fudge are joined by sultanas, honey, icing sugar and milk chocolate HobNob biscuit aromas. The bittersweet malt becomes more influential, as do greener aromas of fresh hay, apple skins and heather.

On the palate this whisky initially has a slightly hot and peppery astringency to it. This softens and proceeds along a similar path to the nose. Toffee, fudge and plump juicy sultanas lead the way along with some crumbly brown sugar and crisp green apple skins. Underneath is a distinct maltiness that has a biscuit-like quality, while a pinch of cocoa powder and cinnamon add some depth.

The finish is warming, dry and short. This is especially true once sweeter elements fade away (think of toffee apple, sultana and milk chocolate). Then plenty of woodiness and spice come in, especially vibrant oak and cinnamon, which are backed up by robust malted notes.

The whisky feels like it needs a drop of water or two adding, and becomes creamier and softer when this happens. The nose comes across in a more floral, almost blossom-like, way and notes of vanilla and butterscotch are particularly accentuated on the palate. The finish becomes less drying and more sweet with delicious notes of candied orange and dried apple to the fore.

What's the verdict?
This is a pleasant whisky and one that takes Glengoyne in a slightly different flavour direction than previous expressions we have sampled from the distillery. Gone are the big heavy ex-sherry casks notes and these are replaced with more subtle aromas and flavours. This gives a fresher whisky than we expected and one that is not too over complicated. There is clearly some young whisky in the mix here and we found it to be better with the addition of water. This softened it and brought out the sweeter notes.

posted by Whisky For Everyone at 2:31 PM