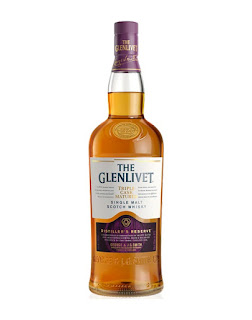 The Glenlivet Distiller's Reserve is part of the new Triple Cask range of single malts, which are exclusive to the travel retail sector. It is a rebranding of the previous Master Distiller's Reserve release. The other two whiskies in the range are the White Oak Reserve (which replaces the Solera Vatted) and the Rare Cask (which is a re-naming of the Small Batch). As the name suggests, three casks have been used for maturation for each bottling. In the case of the Distiller's Reserve these are first-fill American white oak, European oak and ex-sherry casks used in combination.

The Glenlivet distillery is located in the foothills of the Cairngorm mountains, close to the village of Ballindalloch in Speyside. It is named after the Livet Glen in which it sits and was founded in 1824 by George Smith, whose signature appears on the labels and packaging. The distillery was the first in Speyside to be granted a distilling license under the new Parliamentary Excise Act of 1823.

The Glenlivet is now one of Scotland's largest distilleries with an annual production of 13 million litres, which has increased after a recent expansion. It is owned by Chivas Brothers, the Scotch whisky wing of Pernod Ricard. The Glenlivet is one of the best selling Scotch single malt brands, regularly battling with Glenfiddich for the number one spot.

The Glenlivet Distiller's Reserve is bottled at 40% ABV and is available at airports around the world. It is also currently served on selected British Airways flights. A bottle will cost £43/ $53 US/ €48.

Our tasting notes
The colour is golden yellow and the nose is full of crisp green pear and apple aromas. These are complimented by further aromas of fudge, heather honey and butterscotch. Underneath are hints of earthy baking spices with cinnamon to the fore.

On the palate this whisky is immediately soft and fudge-like with further overtones of toffee and chewy caramel sweets. These sweet notes combine well with the green fruit from the nose, although the apple and pear now feel more stewed or cooked rather than fresh and crisp. Further notes of heather honey and golden syrup add some depth, along with hints of vanilla and sultana. Warming baking spices then begin to impose themselves - think of cinnamon, all-spice and clove in particular. Late hits of white pepper and candied orange peel round things off.

The finish is sweet with that late peppery warmth. The pear and apple notes fade, followed by the sweetness. A nuttiness - imagine hazelnut especially - develops to accentuate the earthy and warming baking spices, which combine to drag out the otherwise short finish.


What's the verdict?
This Glenlivet is easy drinking and enjoyable. It is clearly on the young side - the peppery nature and vibrant green fruit characteristics demonstrate this - but this youthfulness marries well with the sweet and spicy elements from each of the three casks. The Distiller's Reserve is not most complex single malt around but is very pleasant and flavoursome all the same. A nice discovery and one that we hope to revisit again soon.