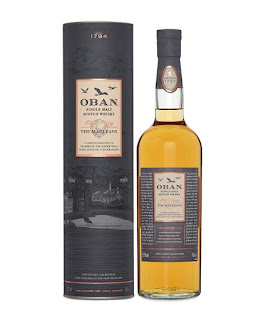 The Old Teddy is the latest exclusive limited edition single malt from the Highland distillery of Oban and will only be available in the distillery visitor centre. The new whisky has been created to pay homage to the Macleans, a family that have given three generations of service to the distillery. This started with 'Old Teddy' in 1953, who worked his way up to become Master Distiller. He was followed by his son 'Young Teddy' in 1985. Young Teddy's son Derek then joined the distillery team in 2017 and continues to work at Oban today.

The Oban distillery is located on the west coast of Scotland and is named after the town of the same name. Oban translates as 'little bay' from Gaelic and the town has grown up around the distillery, which was founded in 1794 by Hugh and John Stevenson in the buildings of a former brewery. It is owned by Diageo and the 14 years old expression forms part of their Classic Malts series. Oban is one of the smallest distilleries in their Scotch portfolio with an annual production capacity of just 870,000 litres.

Oban Old Teddy has been matured in ex-bodega sherry casks and re-fill oak casks, and is bottled at the cask strength of 51.7% ABV. Just 3,960 bottles have been produced and each one will cost £150. It is only available to purchase at the distillery shop and is also available to taste on request for £10 at The 1794 Bar in the visitors centre.

Our tasting notes
The colour is golden yellow and the nose is packed with a combination of green and sweet aromas - think of green apple, fresh leaves and cut grass in tandom with caramel and Scottish tablet. Behind are hints of red apple skin, cookie dough and lemon zest with further background grainy cereals and oaky aromas.

The immediate impression on the palate is that this whisky is richer than nose suggests. It feels more robust with gripping malt and bittersweet cereals leading the way. Then comes some sweet and juicy notes reminiscent of fresh apple juice, melon and a hint of squeezed lemon.  The green characteristics from the nose are more subtle. Crisp green apple, a hint of peardrop sweets and freshly mown grass are all evident alongside further notes of yeast, milk chocolate, sugary Scottish tablet and warm biscuits. Late and warming woody spices and a distinct peppery note add a dryness.

With water the nose is noticeably more floral (think of heather and honeysuckle in particular) with a  dense perfume. Notes of custard and something bitter like rhubarb also come through. The water softens the palate with the green notes returning with more force, along with plenty of tablet-like sweetness. A pinch of icing sugar also appears. Then the whisky becomes woody, warming and dry.

What's the verdict?
This new limited edition Oban is a really interesting whisky. There is plenty going on but some things seem in contrast with each other. For example, the characteristics do not match what is experienced on the palate and it is almost like having two different whiskies in the glass. Also, some of the notes experienced point to the whisky being quite youthful (the freshness and green elements) but others suggest something much older.

There is nothing wrong with either of these things and we like it as it maintains the interest throughout. We particularly enjoyed Old Teddy with water and would recommend trying it like this if you purchase a bottle.

Having just visited the distillery I can honestly say I feel this is one of the finest I have ever tasted. Try it or miss out on something very worthwhile.