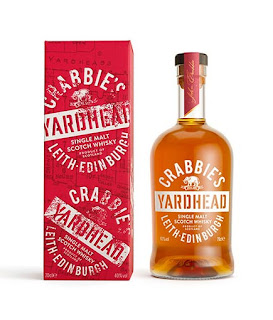 Crabbie's Yardhead is a new single malt from whisky bottler and distiller John Crabbie & Co. It has been designed to attract new spirit drinkers through mixing and making whisky cocktails. The Yardhead, named after the area in Leith where Crabbie's original maturation warehouses were during the 1820s, is a young Scotch single malt aimed to take on and fit in to the ever expanding blended malt and 'no age statement' whisky category. The distillery of origin is un-named but from the Highlands.

The Crabbie name has been associated with the Scotch whisky industry since the early 1800s and founder John Crabbie selected whiskies for blending and bottling from all over Scotland. He is considered an early pioneer of whisky blending. After disappearing in the early 20th century, the company has now been reborn under the ownership of Halewood Wine & Spirits. This includes a single malt range that features an 8 years old Highland, 12 years old Peated Island plus older age statements of 25, 30 and 40 years old from Speyside.

The reinvention includes the building of a new distillery in Granton, Edinburgh and this began production last year. The first casks of whisky were laid down to mature in November 2018. Crabbie's also have a second distillery in the pipeline and this is based in Graham Street, Leith. It is due to open and begin production in September. As with many new whisky distilleries, they will also be producing Crabbie's gin.


Crabbie's Yardhead, which was officially launched at events in Edinburgh and London in July, is bottled at 40% ABV and is available now in selected specialist whisky retailers and supermarkets. A bottle will cost £26/ $32 US.

Our tasting notes
The colour is golden yellow and the nose is sweet and lively. Youthful aromas of crisp green apple and lemon zest combine nicely with those of butterscotch and vanilla. There are hints of cookie dough and baking spice in the background.

On the palate this whisky is again sweet and vibrant with a pleasant lightness. There are initial notes of butterscotch, toffee and vanilla and these are backed up by the crisp apple from the nose. This adds a green, juicy and slightly tart edge to things. Then comes the cookie/biscuit-like note again and a twist of lemon zest, both followed by warming baking spices (think of cinnamon and all-spice with a pinch of clove). Later notes of heather honey, brown sugar and a hint of candied lime add some depth.

The finish is short and sweet, turning quite hot and peppery once those butterscotch and toffee notes fade. The peppery nature increases to give a mouth watering quality and a feeling of dryness. A very late hint of the crisp green apple rounds everything off.

What's the verdict?
The Crabbie's Yardhead is not the most complex whisky ever but then it is not supposed to be. It is light, sweet and youthful. It is specifically designed to be used within a cocktail or with a mixer and these are qualities that you need to work well in both scenarios.

By tasting it neat, as we do for all whiskies that we review, we are probably doing it a disservice. But it is pleasant enough and decently priced for a young 'no age statement' single malt. At the launch, where a number of cocktails had been created to show it off, Yardhead performed better. This was no surprise as the sweetness in particular shone through.

Bought a bottle from First Choice to give it a ttry, we are seasoned whiskey drinkers. Our verdict: bloody awful, rough as guts, no wonder they suggest it be used for cocktails.

That's what it is designed for - to mix. It is not really one for the 'seasoned whisky drinker' or to sip neat in our view. It is cheaply priced and clearly pretty young. Having spoken to the new Master Blender, she is working on an improved recipe to make it appealing to both new drinkers and more seasoned ones while keeping it at roughly the same price. Matt @ WFE.

Not surprisingly the negative comment is posted anonymously, shame they never had the guts to put there name to the nasty comment. This whisky is fine, ok not the best but very drinkable. To many whisky snobs running this down

Can't understand why this post is labeled as Unknown as I put my name to it.

Have had twice before (both the old style bottle in red box) and thought them quite fine. Bought another one this week, in the new flagon finger loop style, and the taste has changed dramatically to include a heavy peaty flavour... not a fan!!

A whisky journey has to begin somewhere.

As is a whiskey for a mixer I don't think it's bad but I am not one of those people trying to smell daisy's and ant piss in its aroma . It's thought it ok would buy again and a bit of ginger ale and it's lovely maybe the ant piss brigade would drink it then 🤠

Who would want to spoil a single malt with any kind of mixer? With this, Crabbies Yardhead, however, it would seem appropriate. Then. at £16 a bottle, one would't expect very much.Add 50% water helps a bit.

The persistent old chestnut that whisky must be drunk neat does the industry a disservice, and frankly makes no sense. It doesn't see smart to try and sell something by limiting the way people can consume it. I'm a seasoned drinker and I always take my whisky, single malt or otherwise with a little water. That said I tried this neat and it was a little harsh to my taste but as a mixer it was great. Ginger beer, ice and a slice of lemon and the whisky was wonderful. Great stuff for mixing and that's what the makers recommend so I'd give this top marks.