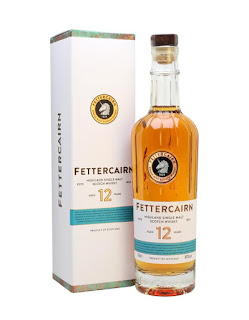 This whisky is the best-selling core product in the recently revamped range of single malts from the east Highland distillery of Fettercairn. The relaunch occurred in the Summer of 2018 and was accompanied by a full bottle and packaging redesign, along with a refreshing of the brand logo. The four bottlings are designed to show an emphasis on old and rare stock and all carry age statements - these are at 12, 28, 40 and 50 years of age. This 12 years old expression has been fully matured in American white oak ex-bourbon barrels and is bottled at 40% ABV.


The Fettercairn range is available in key markets including Asia and Europe. It can be found in specialist whisky retailers and also through selected supermarkets in the UK. This 12 years old is priced at £48/ $60 US per bottle. For further information on this whisky and the others in the Fettercairn range, please visit www.fettercairnwhisky.com.

Our tasting notes
The colour is golden yellow and the nose has a fresh and fruity vibrancy to it. There are immediate aromas of green apple and tinned tropical fruit salad, which are followed by further aromas of honey, vanilla and brown sugar. Underneath are hints of cookie dough, yeast and cinnamon.

On the palate this whisky feels initially richer than the nose suggested. Caramel and toffee notes dull the vibrancy and combine with the honey and vanilla characteristics to begin with. Then comes a hit of green apple, although this has more of a cooked or stewed feel rather than the fresh apple feel on the nose. This is supported by further fruitiness in the form of tropical fruits - think of dried pineapple and mango with a hint of peach. There is a background hit of fresh ginger and this is back up by cinnamon, white pepper and all-spice.

The finish is on the short side, especially once the sweet and fruity elements fade. A slight bitter and metallic edge appears and this lingers on alongside some delicate baking spices and a faint vegetal note.

What's the verdict?
We have never reviewed a Fettercairn during the 11.5 years of writing this blog, so there was a sense of intrigue about this whisky. We had no idea what to expect as a result. It is pleasant and easy drinking with plenty going on. We particularly enjoyed the tropical fruit notes that develop on the palate, although the bitter/metallic edge on the finish may push it outside of some people's comfort zone.