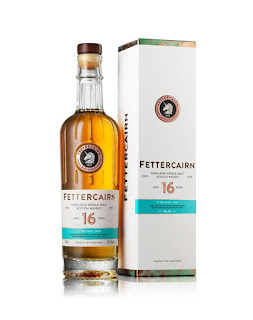 This whisky is a new addition to the core range of the Highland single malt distillery of Fettercairn. It joins the also newly released 22 years old expression in filling the previously large age gap between the 12 and 28 year olds in the range. The whiskies used to create this 16 years old were made using rare chocolate malt, which is more commonly used in the brewing industry, and then matured in first-fill American oak ex-bourbon casks. They then went for a finishing period of two years in ex-sherry and ex-Port casks. This 2020 edition of Fettercairn 16 years old is bottled at 46.4% ABV and will be released to both domestic and travel retail markets - prices are £69 for a 70cl bottle and £80 for a one litre bottle.

"Fettercairn is a beautiful distillery with a treasure trove of aged and rare stocks. I’ve worked there since 1990 and it’s a pleasure crafting Fettercairn single malt for whisky enthusiasts the world over."
Stewart Walker - Distillery Manager at Fettercairn.

The Fettercairn range is available in key markets across both Asia and Europe. It can be found in specialist whisky retailers and also through selected supermarkets in the UK. For further information on this whisky and the other whiskies in the Fettercairn range, please visit www.fettercairnwhisky.com.

The colour is deep gold with an amber tint and the nose feels rich and highly floral. Aromas of citrus blossom and honeysuckle mix with heather honey and golden syrup. Then come further aromas of oat biscuit, gingerbread, raisins and currants with a background hint of candied orange peel, buttery shortbread and apricot jam.

On the palate this whisky continues with the rich feel. It has a viscous and slightly heavy quality that leads with the honey and golden syrup notes from the nose, plus crumbly moscovado sugar. Then comes some caramel along with the dark dried fruits - think of juicy raisins and sultanas again, but with some dried apricots and candied orange and lemon peel. Underneath are further notes of spicy gingerbread and bittersweet malty and oaty biscuits, plus a hint of butter shortbread and fudge. Then come plenty of savoury notes that threaten to dominate the finish - imagine espresso coffee, dark chocolate and a whole host of earthy and dusty spices such as cinnamon, all-spice and white pepper. A late hint of dried mushroom also puts in an appearance and the combination with the sweeter elements reminds us of truffle honey.

The finish is long and increasingly savoury. The rich and sweet characteristics hold their ground well but begin to fade and leave the earthy, biscuity notes to do battle. They linger for plenty of time and reveal notes of orange oil and a whiff of cigar smoke very late on.

This is a big and rich whisky that is on the heavier side of tthe scale. Fettercairn's bold new make spirit combines well with the rich characteristics of both the ex-sherry and ex-Port casks to give plenty of sweetness, along with pleasant savoury notes later on.

It feels like a spicy dense fruit cake in liquid form and would be perfect for a cold Autumn or Winter's evening next to a log fire. Or a perfect Christmas Day dram or from a hipflask on a long Festive walk. Not for the faint hearted but definitely worth a try if you have never had a Fettercairn before or if you are a fan of expressive rich sherry cask matured whiskies.