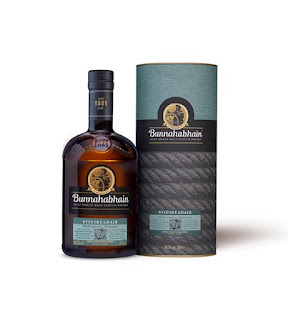 This whisky from Bunnahabhain forms the entry point in to the Islay distillery's core range of single malts. It sits alongside expressions at 12, 18, 25 and 40 years of age and a plethora of limited editions and special releases. The distillery is one that favours the use of Gaelic names for their whiskies and this is no exception, being arguably the most complicated and daunting of them all to try and get your tongue around. Stiùireadair is actually easier to say than you would think - it is pronounced stew-rad-hur and means 'helmsman' in Scots Gaelic. The helmsman in question is the one on the brand's logo.

The Bunnahabhain distillery (pronounced boo-na-hav-en) was founded in 1881 and is located in the village of the same name on the north eastern coast of Islay. It is the anglicised name of the ancient settlement of Bun na h-Abhainne and translates as 'foot of the river'. The distillery has endured a number of closures and part closures, the most recent being between 1999 and 2002. The remote and rugged location, plus water supply, have historically been issues. The distillery has a capacity of 2.7 million litres per year and is currently owned by Distell, who took over in 2013.

The Bunnahabhain Stiùireadair is a marriage of differing ages of whisky that have been matured in first-fill and re-fill ex-sherry casks. It is bottled at 46.3% ABV and is both non chill-filtered and of natural colour. It is available in specialist whisky retailers worldwide and can be purchased in two sizes - 20cl (£17.50/ $24 US) and 70cl (£38/ $52 US).

The colour is deep golden yellow and the nose has an instant sweetness and nutty quality to it. There are aromas of fudge and toffee, plus almond and walnut. There is also a good pinch of hot white pepper and some fresh green apple. A late aroma of milk chocolate and brine comes through, and this gives a feel of salted caramel.

On the palate this whisky has an initial malty feel with fairly robust cereals giving a bittersweet edge. Then comes the sweet characteristics, especially the fudge and toffee from the nose. These notes are backed up by further notes of chocolate and salted caramel, plus a hint of cocoa powder. The warming spices continue with the development of some cinnamon, all-spice and plenty of white pepper. Dried fruit and nutty notes add depth - think of raisins and sultanas, plus walnut and toasted almond. Some orange oil also comes through later on. The crisp green apple and slight thin mouthfeel towards the end indicates there are some youthful whiskies included. The malty cereals return to round things off.

The finish is shorter than expected - another indication of the presence of those youthful whiskies in the mix. The sweet characteristics and dried fruit notes fade rapidly to leave the warming pepper and baking spices, plus the malty elements exposed. These too fade to leave a bitter edge.

The Stiùireadair is not bad as an entry point to the Bunnahabhain range. The coastal feel that the distillery is known for,  essentially a salty and briney quality, is present but the depth of flavour that the older expressions offer is simply not there. This manifests itself in the slightly thin mouth feel and short-ish finish, both of which let it down slightly. That said, it is a good way of trying Bunnahabhain or a non-smoky Islay whisky for the first time and at an affordable price. Especially as it comes in a 20cl bottle.