These two whiskies form part of The Secret Speyside Collection from Chivas Brothers, a 15-strong selection of single malts from the company's lesser known Speyside distilleries. Four such distilleries feature in the collection - Braes of Glenlivet, Glen Keith and Longmorn are all currently in production with Caperdonich closed for many years and now demolished. This makes these two whiskies arguably the rarest of the series.

The Caperdonich 18 years old in particular is extremely rare as it features peated spirit, which was only produced at the distillery for a short time each year during a short period of its history. The Secret Speyside Colection feature six Caperdonichs in total - three using the classic spirit at 21, 25 and 30 years of age, and three using the rare peated spirit at 18, 21 and 25 years of age.

The Caperdonich distillery was founded in 1897 by James Grant in the Speyside village of Rothes. It was built as the sister distillery to Glen Grant and unromantically named as Glen Grant #2. The two were famously connected by a 'whisky pipe' to allow spirit to be filled to cask at Glen Grant. This was elevated over the main street of Rothes. However, it closed in 1902 due to the Pattison Crash and did not reopen until 1965. It was only then named as Caperdonich, which translates as 'secret well' from Gaelic.

The single malt produced at Caperdonich was exclusively used for blending by owners The Glenlivet Distilleries Ltd. and was a key ingredient in such brands as Chivas Regal and Ballantine's. They did not own any Islay or western isle distilleries so took the decision in the early 1970s to start producing peated spirit at two sites for a short period each year. This fulfilled their needs, rather than purchasing from their competitors. Caperdonich was one, Benriach was the other. Caperdonich was closed in 2002 and eventually demolished in 2009. 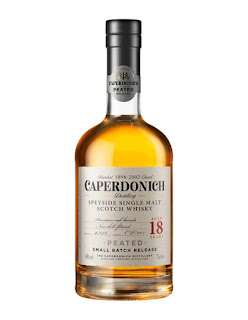 The colour is golden yellow and the nose has an instant hit of sweet and earthy peat. This has a feel of damp earth, heather and dried bracken to it. Underneath are aromas of honey, white chocolate and crisp green apple with hints of cream soda, gingerbread and orange oil.

On the palate this whisky has a peppery and warming quality to begin with. This is driven by the peat smoke, along with a good pinch of baking spice and white pepper. The smoke is again soft and sweet with the earthy and vegetal feel. Sweeter characteristics begin to come through and this helps to soften the whisky. Stewed apple, honey, golden syrup and white chocolate notes are all evident and are backed up by suggestions of lemon zest, orange oil and fudge. The finish is long and the sweeter elements soon fade to leave the smoke and spices on show. This gives a drying, ashy and slightly chalky feel towards the end. 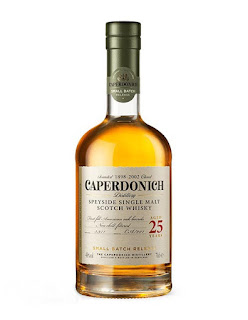 The colour is deep golden yellow and the nose has initial aromas of caramelised apple, creme brulee and golden syrup. Underneath are dusty baking spices, especially cinnamon and all-spice, along with a distinct malted cereal quality and a pinch of cocoa powder.

On the palate this whisky feels creamy, luxurious and soft with a lovely initial note of preserved lemon hitting the tastebuds first. Then comes the distinct maltiness and caramelised apples from the nose. These combine well with some honey, vanilla and golden syrup. A big pinch of earthy and dusty baking spices (think of cinnamon, all-spice and nutmeg especially) adds further depth, as does a note of milk chocolate and a drop of clove oil. Late hints of canned pineapple, dried mango and over ripe pear round thing off nicely. The finish is of decent length and becomes more earthy, malty and peppery with time.

From memory we have only ever tried one Caperdonich in the past and that was a very long time ago. Therefore this was always going to be an interesting blog post and sampling for us. We always enjoy finding out and writing about different and unfamiliar distilleries, plus tasting whiskies from those distilleries. In the case of Caperdonich, we feel lucky as there cannot be too much of it left after almost 20 years since its closure.