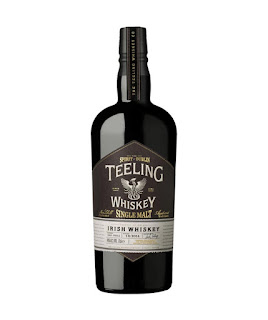 This whiskey forms part of The Unconventional Collection from Irish distiller Teeling. The Teeling Single Malt is made from 100% Irish malted barley and features a complex marriage of five cask types - the whiskey has been matured in ex-Cabernet Sauvignon and White Burgundy wine casks plus ex-Madeira, ex-Port and ex-sherry casks. These are then combined in differing percentages to create the final single malt. The Teeling Single Malt is released at 46% ABV and is both non chill-filtered and of natural colour. It is available in specialist whisky retailers and travel retail in selected markets worldwide. A bottle should cost around the £50/ €57 mark.

The Teeling Whiskey Company was founded by Jack Teeling in 2012. The Teeling family are true pioneers and had previously helped to rejuvenate the Irish whiskey industry by founding Cooley distillery in County Louth in 1987. Their aim was to bring back old Irish whiskey brands that had been lost over time - these included Connemara, Kilbeggan and Tyrconnell.

Cooley was sold to Beam Global in January 2012, which left Jack free to set up Teeling Whiskey Co. Since then they have built a new distillery in the centre of Dublin and this began production in mid-2015. The range of whiskeys has also expanded significantly and collected many awards from around the world.

The colour is a pale lemon yellow and the nose is immediately green, delicate and fresh. Initial aromas include green apple and frest cut grass, plus hints of heather and cereal-like earthiness. Then come further aromas of sugary sultana and candied lemon peel, both of which add to the vibrant feel.

On the palate this whiskey has an instant hit of warming spice - think of white pepper with a pinch of cinnamon. Then comes an interesting vegetal note that is most reminiscent of crisp green capsicum peppers. Some much needed sweetness arrives shortly after in the form of white chocolate, sugar syrup and a blob of heather honey. There are also further notes of vanilla, apple Danish pastry/ apple pie and a lovely mix of both candied lemon and fresh lemon zest. The green apple characteristic seems to increase with time to become more influential. A background hint of apricot jam and that fresh cut grass from the nose come through at the very last minute.

The finish is of decent length, although it is the peppery and warming spices that linger most. The green apple-like quality fades first, then the sweet elements and this allows the earthy cereals and those spices to shine. Mouth watering and delicious.

This is a whiskey that easily shows why Teeling have won multiple awards in worldwide spirits competitions. It has a distinct lightness, delicacy and vibrancy yet has a set of layers that contribute to a lovely depth and complexity. The combination of aromas is enticing and the palate delivers on the promise of the nose. We particularly enjoyed the zesty and vegetal notes, which added an extra dimension. Definitely worth a try.