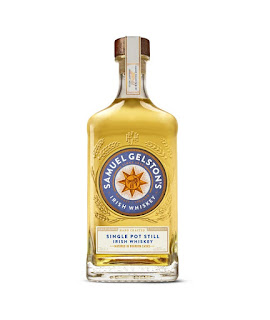 Samuel Gelston's is an Irish whiskey brand that is owned by Halewood Artisanal spirits. This single pot still has been produced using both malted and unmalted barley in the traditional way at an un-named distillery in Ireland and then matured exclusively in American oak ex-bourbon casks. This Single Pot Still sits within a wider range of whiskeys that includes the Blended Irish Whiskey and single malts at no age statement, five and 12 years of age (three different expressions) plus the 26 years old Very Rare Reserve. The Samuel Gelston's Single Pot Still is bottled at 40% ABV and is available in selected markets globally. A bottle should cost around the £22-25 mark.

The brand was founded in 1830 by Samuel Gelston, a wine and spirits merchant based in Belfast, Northern Ireland. He had a shop located in Corporation Street in the city and his Gelston's Old Irish Whiskey became very popular. Upon his death the brand was sold to Harry J Neill, who expanded the business, the popularity of the whiskey and its distribution significantly.

However Gelston's, like many Irish whiskey brands, then disappeared as sales slumped due to Prohibition in the USA during the 1920s but has now been revived by Johnny Neill, a fifth generation descendant of Harry J Neill. He has also created such brands as the Whitley Neill and Marylebone gins, and Samuel Gelston's sits within the wider Halewood Artisanal Spirits portfolio.

The colour is golden yellow and the nose has a lovely freshness and vibrancy to it. Initial aromas included honey, vanilla and a hint of lemon zest. Underneath are further aromas of butter shortbread, creamed coconut and robust cereals along with hints of freshly mown grass, white chocolate and cinnamon spice.

On the palate this whiskey feels soft and creamy with delicious honey and vanilla notes rising first. Then comes a distinct milk chocolate characteristic that adds to the softness and gives depth to the sweetness. There is also underlying robust cereals present and these give structure and have a cookie dough biscuit-like quality. This becomes more like the butter shortbread note from the nose with time. Underneath are hints of fresh lemon zest and dessicated coconut, along with an increasingly influential green grassy nite and a hint of creamy hazelnut praline. Warming baking spices add another dimension - think of cinnamon and a suggestion of clove especially. A late pinch of white pepper rounds things off nicely.

The finish is warming and on the short side. The sweeter elements fade, as do the coconut and vanilla notes, and this leaves the baking spices, biscuit and cereal characteristics to linger on. Again, a late pinch of white pepper rounds things off.

This Samuel Gelston's Single Pot Still is very nice and expressive. It is not the most complicated whiskey but shows a good set of classic single pot still characteristics. The whiskey also offers great value for money and the price makes it very accessible for everyone that may never have tasted any single pot still spirit before. The whiskey offers plenty of flavour and is great neat or especially over ice. Delicious.