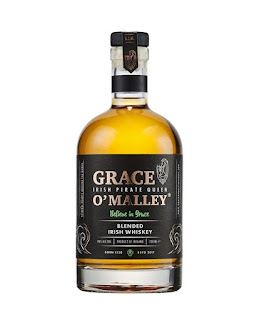 Grace O'Malley is an blended Irish whiskey that has recently been introduced to the UK market. This follows successful launches in Ireland and the USA. The whiskey is named after Grace O'Malley, a legendary Pirate Queen from Ireland in the 16th century. The blend contains whiskeys with age statements ranging from three to ten years old. There is a relatively high percentage of single malt included (both double and triple distilled malt, and 46% of the recipe), along with single grain and pot still whiskeys. These have been matured in ex-bourbon and ex-rum casks plus some French Oak barrels, before being blended together by Paul Caris the Master Blender. It joins the Dark Char Cask and Rum Cask, plus a gin in the Grace O'Malley range.

Grace O'Malley is a brand created by the Irish Whiskey Company (IWC). The heritage of the company sees the Teeling family, formerly of Cooley distillery and now the Teeling distillery in Dublin, as majority owners and has The Great North Distillery in Dundalk, Co. Louth at its heart. This started production in August 2015 having been converted from an old brewery by IWC. They produce all three styles of Irish distillery on the site - single malt, single pot still and single grain - and is now the second largest Irish distillery after Midleton.

Grace O'Malley is bottled at 40% ABV and is available in selected retailers in the UK. As mentioned, it is also currently available in Ireland and the USA. A bottle will cost around the £30 mark. For more details on Grace O'Malley, please visit the brand website www.graceomalleywhiskey.com.

The whiskey has a deep golden colour and the nose has an instant freshness and sweetness to it. Aromas of green apple, heather honey and milk chocolate are followed by those of toffee, caramel and vanilla. Underneath are further aromas of malted cereal biscuit and hints of cinnamon and toasted hazelnut.

On the palate this whiskey has the same freshness and sweetness as seen on the nose. Crisp and tart green apple notes mingle with a hefty pinch of white pepper and a good dollop of honey. This honey-like note becomes more pronounced with time and heads more in the direction of honeycomb and golden syrup as it does so. These are then joined by further sweet notes such as milk chocolate, toffee and a hint of caramelised pineapple.

Underpinning everything is an increasingly robust maltiness and this adds depth and structure. This again has a biscuit-like quality and grips the tastebuds. A late note of toasted nuts (imagine hazelnut but also a suggestion of walnut) accentuates this. Some even later baking and wood spices add to the initial peppery warmth - think of cinnamon and a pinch of powdered ginger especially.

The finish is a little on the short side. It is the gripping malty characteristic that lingers most as the fruit (that green apple and hint of pineapple) and confected sweetness fade rapidly. This has the effect of bringing the white pepper and warming spices to the fore.

Grace O'Malley would be a lovely introduction to Irish whiskey for anyone wanting to try it for the first time. She is not the most complicated whiskey, and nor would you expect it to be for the price, but it is well blended and flavoursome. It offers plenty for the drinker and presents a great entry level experience.

If only the finish were not so short or slightly aggressive, then this would elevate it from a decent dram to an excellent one. This would be delicious over ice or with a mixer too because of that defined sweetness, which we will definitely be trying soon.