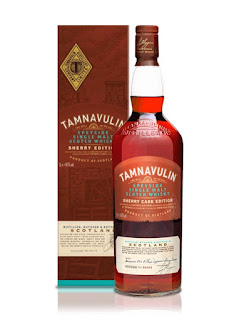 This whisky formed part of a relaunch for the then little-known Speyside distillery of Tamnavulin in 2016. Prior to that very little from the distillery was available outside of the independent bottling scene. The Sherry Cask Edition sits in the core range of single malts alongside the Double Cask, a travel retail exclusive Tempranillo Finish, a series of limited edition vintages dating back to 1970 and three wine cask finished whiskies featuring ex-Cabernet Sauvignon, ex-Grenache and ex-Pinot Noir barrels. This Sherry Cask Edition has been matured in American white oak ex-bourbon casks before a finishing period in three different types of ex-sherry cask. It is released with no age statement.
The Tamnavulin distillery is located in the hamlet of Tomnavoulin and sits on the banks of the River Livet near Ballindalloch. It was opened in 1966 by the Tamnavulin-Glenlivet Distillery Company, a subsidiary of Invergordon Distillers Ltd. The name of the distillery translates as 'the mill on the hill' from local Gaelic. Tamnavulin was closed for 12 years between May 1995 and July 2007. It was reopened by Whyte & Mackay who remain as the owners. The distillery has a large capacity of 4 million litres a year with most be allocated for blending contracts. The Distillery Manager is Joanne Reaveley.

The Tamnavulin Sherry Cask Edition is bottled at 40% and is widely available in the UK in both supermarkets and specialist retailers alike. A bottle should cost around the £32-£35 mark, although it can also occasionally be found on offer.

The colour is a deep amber and the nose is immediately fruity and sweet. Distinct aromas of green apple and pear mingle with others of muscovado sugar, dark dried fruit (think of raisin and sultana especially) and warming spice (imagine cinnamon and gingerbread in particular. There are also hints of milk chocolate and malted biscuits.

On the palate this whisky is soft, gentle and rich. The green fruits from the nose lead the way and give a lovely freshness. These notes are supported by those of caramel, vanilla extract and brown sugar - this gives an initial feeling reminiscent to toffee apples. Then comes the malty note and this is definitiely more prominent and gripping than on the nose. The maltiness adds structure and other characteristics seem to latch on to it. This is especially true for some delicious warming spice and dried fruit notes - think of juicy sultanas, brandy soaked raisins and candied orange peel mixed with ginger cookies, cinnamon sticks and a grind of white pepper. The combination is reminiscent of a good old fashioned fruit cake.

The finish is a little on the short side. The green fruit, dried fruit and sweeter notes are gone quickly and this leaves the more robust malt and warming spices to play. A late hint of apricot jam comes through, which is both unexpected and enjoyable.

This Tamnavulin Sherry Cask Edition is a lovely, gentle and easy drinking whisky. It has some lovely characteristics coming from both the distillery spirit and those three types of ex-sherry cask. It is no 'sherry bomb' or 'sherry monster', but displays some deliciously subtle aromas and flavours.

The single malt would be a great way to introduce someone to the sherry cask matured genre of Scotch whisky without giving them anything too heavy. Very nice and offers plenty for the money. It is great to see Tamnavulin starting to be more available too. We cannot wait to sample some of the other expressions.