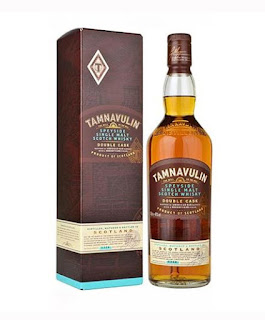 This whisky formed part of a relaunch for the little-known Speyside distillery of Tamnavulin in 2016. Prior to that very little Tamnavulin was available outside of the independent bottling scene. The Double Cask is the core product in a range of single malts that also features the Sherry Cask Editon, the travel retail exclusive Tempranillo Finish, a series of limited edition vintages dating back to 1970 and three wine cask finished whiskies featuring ex-Cabernet Sauvignon, ex-Grenache and ex-Pinot Noir barrels. This Double Cask has been matured in American white oak ex-bourbon casks before a finishing period in ex-Oloroso sherry casks, and is released with no age statement.

The Tamnavulin distillery is located in the hamlet of Tomnavoulin (this translates as 'mill on the hill' from Gaelic) in the famous Livet Glen in Speyside. It sits on the banks of the River Livet near Ballindalloch and was opened in 1966 by the Tamnavulin-Glenlivet Distillery Company, a subsidiary of Invergordon Distillers Ltd. Tamnavulin was closed for 12 years between May 1995 and July 2007. It was reopened by Whyte & Mackay who remain as the owners. The distillery has a large capacity of 4 million litres a year with most be allocated for blending contracts. The Distillery Manager is Joanne Reaveley.

The Tamnavulin Double Cask is bottled at 40% and is widely available in the UK in both supermarkets and specialist retailers alike. A bottle should cost around the £32.50 mark, although it can also be found on offer at times.

The colour is deep gold and the nose is sweet and fragrant. Aromas of toffee, honey and golden syrup rise from the glass along with some fresh green apple and hints of dried fruit such as raisin and sultana. Then comes a wave of malted cereals and a distinct grass-like note. This is not fresh cut grass but something reminiscent of hay or straw. There is also a pinch of cinnamon and cocoa in the background.

On the palate this whisky feels soft, rich and sweet. It is initially very sweet with confected sweets (think of apple flavoured boiled sweets and peardrops), golden syrup and heather honey - this tends more towards fresh honeycomb with time. Then come the malty and grassy notes from the nose - these are prominent and intriguing with the the maltiness giving good grip, structure and a bittersweet edge while the grassiness is again dried like hay from a wild meadow and straw.

Underneath and playing a supporting role are notes of dried fruit (think of raisin, sultana and candied orange peel especially), plus fudge and toffee. The pinches of cinnamon and cocoa powder from the nose are also evident late on, as is some white pepper and a hint of gingerbread.

The finish is of decent length. The sweet toffee and confected fruity notes fade to leave the bittersweet and cinnamon-like spice characteristics to take full hold. This gives a gripping and warm finish with a peppery kick right at the end.

This Tamnavulin Double Cask is not the most complicated but then for £30-ish you would not expect it to be. It has the softness and sweetness that you come to expect from Speyside but shows another intriguing side too. The distinct grassy note is not often experienced in Scotch single malts and we have certainly not sampled many.

This gives Tamnavulin a stand out edge and it will be interesting to taste other expressions and see if that definitive note also comes through so well. It may not be to everyones taste because of that but we liked it, having not sampled anything from the distillery for a decade. Double Cask is a delightful and seemingly under rated whisky.