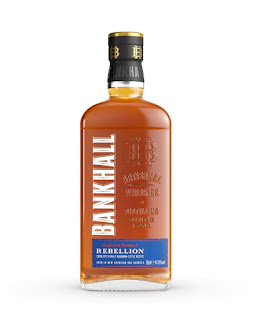 This is the first ever release from the new Bankhall distillery, which is located in the English seaside town of Blackpool. The Rebellion is a bourbon-style spirit that has been matured in new American oak barrels for eight months. It was triple distilled through copper pot stills as a single batch sweet mash recipe consisting of corn, rye and malted barley in Autumn 2020. The casks were then monitored by Vince Oleson, the Master Distiller at Bankhall. The Bankhall Rebellion is released at 47.6% ABV and there are just 588 bottles. These will be available via selected online retailers in the UK only. The recommended price is £30 per bottle.

The Bankhall distillery was founded in 2018 and is owned by Halewood Artisanal Spirits. Production began in late 2019. The distillery is designed to produce a sweet mash spirit - this is a single batch process using traditional bourbon grains. This is distilled three times through copper pot stills designed and built in Scotland. These are named Vader, Luke and Leia. In addition, Bankhall is also experimenting with other styles including single malt and rye whiskies. Their aim is to 're-imagine the UK whisky making process'. The distillery capacity is 250,000 litres per year, although it is currently operating at around half capacity.

"There are very few distilleries producing sweet mash outside of America, so having the opportunity to take on production here in Blackpool is awesome. With sweet mash, you get to start every batch fresh, with a clean profile that you can then really bring to life."
Vince Oleson.

The colour is golden yellow and the nose is youthful but highly fragrant. Aromas of sweet caramel and vanilla mingle with oak spices and white pepper to begin with. These evolve to reveal fruity notes - think of pineapple, orange peel and maraschino cherry - and some earthy and biscuity cereals. A late hint of marshmallow and white chocolate round things off.

On the palate this spirit has an initial creamy texture. The corn drives this and gives lovely structure. Then other notes begin to come through. These are particularly sweet and include honey, butterscotch and white chocolate. There is also that marshmallow hint from the nose in the background.

Vanilla and coconut notes also start to develop, as does the fruitiness. This is definitely more towards the orange now and is most reminiscent of thick cut marmalade. A hint of maraschino cherry also appears. The latter part of the palate becomes much warmer and spicier with drying oak, earthy cereals and a pinch of white pepper coming through.

The finish is of decent length and has an initial juicy fruitiness to it. The cherry note is to the fore and the pineapple returns for a brief appearance. Then it is all about the cereals and oak spices. These lead the finish is a drier and warmer direction.

We always love sampling the first products from a new distillery and this expression from Bankhall is no exception. It is young and cannot be called whisky yet but it is full of aroma and flavour, and shows great promise. We were not too familiar with sweet mash spirit but this is delicious. We cannot wait to see what else may appear from the distillery in the near future.

The owners should also be complimented for putting such a competitive price on this inaugural product. They could easily have charged way more than £30 as most similar distilleries have in the past. It is just a shame there were so few bottles as most had sold out at the time of writing.