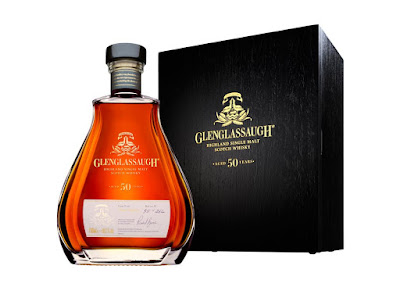 The coastal distillery of Glenglassaugh in the east Highlands has announced the released of an extremely old and rare single malt - the Glenglassaugh 50 years old. The whisky comes from a single ex-Pedro Ximénez sherry cask that has been maturing in a warehouse at the distillery for half a century. The cask was hand selected by Dr. Rachel Barrie, the Master Blender at Glenglassaugh.

The Glenglassaugh distillery is located on the North Sea coast of Aberdeenshire, close to the town of Portsoy and village of Sandend. It was founded in 1875 by James Moir and his two nephews, Alexander and William Morrison. The whisky became popular with blending companies and has historically been used in brands such as Famous Grouse and Cutty Sark. The distillery has had an intermittent history with three long periods of closure, the most recent being between 1986 and 2008.

Glenglassaugh was then purchased and renovated by the Dutch company Scaent Group, who also inherited around 400 old casks of maturing whisky including this one. The first new spirit flowed in November 2008. It has since been through two more ownership changes - first the Benriach Distillery Co. and then the current owners Brown-Forman. The production is 250,000 litres per year, although the capacity is around one million. The name translates as 'valley of the grey green grass' from Gaelic.

"A lot can happen in half a century and this whisky has seen important milestones whilst maturing in our warehouses. From the distillery being lost, then revived again in 2008, to the release of its first core range celebrating its youthful spirit."
Dr. Rachel Barrie.

The Glenglassaugh 50 years old is bottled at the natural cask strength of 40.1% ABV. The single cask has yielded just 264 bottles, which are presented in a crystal decanter and wooden casket. It is available in specialist and luxury retailers in selected markets including Asia, Europe and the UK. The price will be £5,550/ €6,395 per bottle.
Our tasting notes
The colour is a deep coppery gold and the nose is packed with rich fruity aromas. Dark dried fruits (think of raisins, prunes and dates especially) rise first and are accompanied by further aromas of milk chocolate, apricot jam and treacle toffee. Underneath are hints of ripe tropical fruits, cedarwood, a good pinch of baking spices and a hint of menthol.
On the palate this whisky feels equally as rich and luxurious as the nose suggests. A mocha-like note of coffee and milk chocolate comes through initially. This is quickly joined by the rich dark dried fruit - raisin, prune and date again, but with hints of sultana and candied orange peel also - and caramel notes. Then the layers come in waves, each adding its own depth and complexity.
Gripping malted cereals and a suggestion of dried grass or hay kicks this process off, then further sweetness is added with the apricot jam, treacle toffee and ripe tropical notes from the nose. Warming baking and wood spices are next, which give a savoury note - imagine cinnamon, all-spice, cedarwood and hints of sandalwood and ginger cake. Then comes the later menthol hit, which turns slightly minty towards the end.
The finish is long and delicious. Each layer drops away to create an interesting journey. First the dried fruits fade, then the sweeter jam and toffee notes. This leaves the robust cereals and warming spices to linger. Stunning.
What's the verdict?
We have a soft spot for Glenglassaugh - we like the underdog, the battling survivor, the small distillery. We have purchased numerous bottles and visited the distillery on a few occasions, but even then we have rarely tasted anything so old and rare. There are not many casks left of this age so this was a real treat.
Half a century in a Pedro Ximenez cask requires a great cask, careful management over time and a versatile spirit. This 50 years old bottling allows all three elements to shine. The price and limited number of bottles will mean that only a select few will get to sample this elegant and classy whisky. We are glad to be one of them.
posted by Matt C at 3:31 PM